12 Things We Need in Pittsburgh

Unlike Johnny Cash who sang, “I’ve been everywhere man,” I haven’t been everywhere. I’ve been to enough places to know that there are some attractions that other cities have that I think would add to the allure of Pittsburgh, for residents as well as visitors.

These are just a few of the items on our wish list.

What do you think Pittsburgh needs?

1. A New Top of the Triangle Restaurant

It’s been nearly two decades since the Top of the Triangle, the restaurant on the 62nd Floor of the USX Tower closed, and there is a new generation of Pittsburghers and visitors who haven’t had the spectacular experience of dining while looking down on the glittering skyline of Pittsburgh. 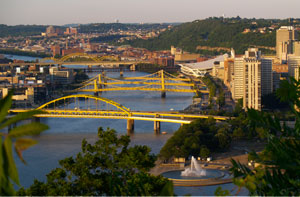 We are the “City of Bridges” yet we don’t have a bridge that’s dedicated to pedestrian traffic. Many cities around the world have very interesting bridges solely for pedestrians like Dublin or Portugal. Some of them are very innovative. I know they often close the Roberto Clemente bridge for Pirates games, but that doesn’t count. And while we’re talking about bridges, we also need . . .

For the thrill seekers among us, how about a bridge that hikers can climb? The Sydney Harbor Bridge in Australia allows hikers to scale its towering arches. I think the West End Bridge would be an ideal one to scale as it gives and encompassing view of our three rivers and city.

With a lot of the Mt. Washington overlook in disrepair, it’s a tall order to look beyond a standard concrete overlook, but why not max out the view from Mt Washington with a glass skywalk like they have at the Grand Canyon? A fee could be charged to tread on it and perhaps that admission fee could fund repairs for the rest of the overlook.

I know, there are plans to build a Ferris wheel at the proposed Esplanade next to the Rivers Casino, but until it’s a reality, we’re going to nag like a kid in a toy store until we get one. Singapore, Seattle, Chicago, and London are a few of the places that have one, and since Pittsburgh was the home of the inventor of Ferris wheel, we absolutely need one.

Hollywood has its famous sign, and we used to have one on Mt. Washington, but now we are left with a humdrum billboard. They’ve been battling over this sign for a while, but how about coming to an agreement and constructing a huge Jumbotron. We could pair it with a “Kiss” camera like they have at the hockey game. Someone with a camera could wander around town and take pictures of people hugging or kissing and then beam it back to the sign on Mt. Washington so that all could see. It would promote peace and goodwill, and people love to see themselves on scoreboards. Pittsburghers would eat this up like nachos with extra cheese. While we are on signs, we also need . . .

When we were in Nice, people stood in line to get their picture taken with the #IHeartNice sign. When I visited the Rock and Roll Hall of Fame, I noticed that Cleveland had such a sign on their lakefront, and while we were dining near it, three wedding parties came to it to have their picture taken in the space of an hour. If Cleveland has one, shouldn’t we?

When we toured Rome, our guide told us that when an emperor was victorious in battle, he’d bring back the spoils of war to the citizens and then commemorate the victory by constructing a triumphal arch. At one time the Eternal City had 36 arches, now there are three and people still flock to view them. We have been known as the City of Champions, and after all the late Steelers broadcaster Myron Cope did dub Steelers Coach Chuck Noll, the Emperor Chaz. Wouldn’t the entrance to Point State Park look spiffy with an imposing triumphal arch carved with likenesses of great Pittsburghers—it would certainly be more impressive than those statues of Franco and George Washington at the airport that everyone rushes past.

Barcelona has a cable car system that gives riders a fantastic view of the port and city. Cable cars could connect from Mt. Washington to the Point and then to the North Shore, giving riders one heck of a ride and view.

Like the Ferris wheel, there has been some talk of a zipline from Mt. Washington to the North Shore. We think that would be a great attraction. Maybe it could also be used by commuters. It would be safer than all those cyclists on our streets.

Remember how visitors flocked to see the huge inflatable rubber duck a few years back. Why not a permanent inflatable moored near a riverbank? Since Pittsburgh is associated with dinosaurs why not a giant dinosaur, or if it has to a water creature maybe a giant carp?

We have so much water surrounding us, why not accentuate our assets and provide a submarine ride that explores our rivers. It could also patrol for alligators since we seem to have many of them living in our rivers these days.