If you’ve spent time of the campus of the University of Pittsburgh, the names Trees and Benedum are quite familiar. Joseph C. Trees Hall is located in the University’s upper campus. The hall serves as a multipurpose recreational facility for students, faculty, and staff. A few streets down, sits Michael L. Benedum Hall of Engineering. This landmark academic building is home to the Swanson School of Engineering at Pitt. You’ll also find the names downtown: The Benedum Center for Performing Arts is in Pittsburgh’s Cultural District, and the Benedum-Trees Building which once housed their offices.

But, do you know the men for whom these buildings are named? Both were born and raised outside of Pittsburgh. Yet, they came to leave their marks on our city. 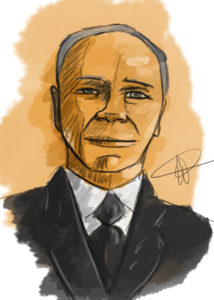 Michael Benedum was born in 1869 in Bridgeport, West Virginia—about 100 miles south of Pittsburgh. At the age of 16, Michael quit school and entered the work force to help support his family when they fell on hard times. He spent two years working 12-hour days at a flour mill for $16 a month. From there, the young man became a manager at a competing mill for nearly nine times his original salary. Mike’s next position ended when his coat sleeve got caught in the gears of a grinding mill, leaving him with a mangled arm. Fortunately, Benedum soon found a sales job for a line of mill equipment. This job may very well be the catalyst for the rest of his life; Benedum learned that he can sell.

Michael eventually got restless in that position. He took his newfound skill and boarded a train to Parkersburg, West Virginia. Only, he never made to that bustling river town. While on the train, Mike gave up his seat to an older gentleman by the name of John Worthington. The conversation that followed set Benedum on a new course. You see, Mr. Worthington happened to be the general superintendent of the South Penn Oil Company—a division of the larger Standard Oil Company. He was impressed by Benedum and offered the young man a job.

Benedum excelled in his new position as a landman. He negotiated land leases for future drilling. On his first assignment, Benedum returned with leases from every property owner on the list and he had money left over. Mike worked his way up to assistant general land agent and began investing in lease royalties, which allow a lease holder to sell his future income stream for cash today. He quickly began to see the benefits. Following a series of events, Benedum got into business with one, Joseph Trees, and eventually left South Penn with leases in his pocket. 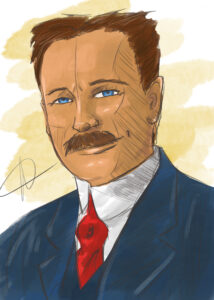 Joseph Trees was born in Delmont, Pennsylvania, in 1870. He grew up working in the family mills before heading off to college. As a strapping young man of 6’3”, Joseph played football at the Indiana Normal School—which later became Indiana University of Pennsylvania. While there, Trees played in a practice game against the Western University of Pennsylvania (now named the University of Pittsburgh). The captain of the opposing team, Bert Smyers, was so impressed with Joe that he began to recruit him to play for WUP. Smyers went as far as arranging free tuition, room, and board for the star athlete. Thus, in 1891, Joseph Trees became Pitt’s first student to receive an athletic scholarship. He proved his merit and graduated with a degree in mechanical engineering in 1895.

During his summer vacations from college, Trees worked for Standard Oil, where he became acquainted with Michael Benedum. One day in 1895, Joe approached Mike with a proposition. He knew of a drill site whose land owner was looking to sell half of his one-eighth interest for $2,000 cash. Trees was putting up $45 and asked Benedum to put up the other $1,955.  After taking a look at the property map, Mike decided to bet on Trees (and geology); he agreed to back Joe in exchange for a three-quarter interest in royalties. It was a winning bet that eventually turned into a 50-year long partnership.

That first well struck oil in 1896. A total of seven wells drilled on that one lease were found to be immensely profitable over the next several decades. However, it wouldn’t be for another eight years that the two men would start their own oil company together.

The leases Benedum had left South Penn with soared in value in 1896. South Penn attempted to buy them back; Benedum turned every offer down. John D. Rockefeller—oil titan and founder of Standard Oil Co.—tried to buy them, as well. Benedum insisted on $600,000 to seal the deal. In the end, the young wildcatter settled for $400,000, or $8 million in today’s money. The real kicker is that Benedum reckoned his properties were only worth $250,000.

Mike’s luck started running low in 1897. Over the next four years, the price of oil plummeted and the industry began to move southwest. Benedum and Trees were coming up dry with their wells, and Mike’s attempts to diversify his portfolio didn’t pan out in his favor. By 1902, all $400,000 was gone and Benedum was deep in debt. 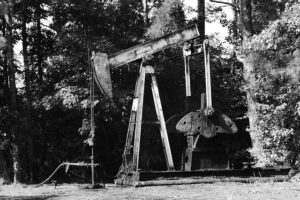 The Benedum Trees Oil Company opened their doors in Wheeling, Virginia in 1904. Trees took charge as driller and engineer, while Benedum acted as financier, trader, and salesman. The combination of talents made them a premier partnership, and very wealthy. In 1911, the company moved their business operations to downtown Pittsburgh, where they remained for the rest of their careers. Benedum is credited as having discovered more oil in more places than anyone in history. He, along with Joe Trees, became known as some of the most successful wildcatters in the world.

Joseph Trees died on May 20, 1943, at the age of 72. He had slumped in his chair while talking business with Mike Benedum, having just suffered a heart attack. Michael Benedum remained active in the company until his death in 1959 at the age of 90.

Michael Benedum married Sarah Lantz in 1896. Born in 1898, their son, Claude Worthington Benedum, was named in honor of the man for whom Michael gave up his seat on the train all those years ago. Sadly, Claude died at the age of 20 from the Spanish flu while serving in World War I.

Joseph Trees and Claudine Willison were married in 1894. The couple had two sons together, though both died young. Joseph Graham Trees died while serving his country as an aviator in the First World War. Merle was the victim of a traffic accident in Pittsburgh at the age of 10. Claudine passed away at the age of 56 in 1928. After her death, Joe remarried to his secretary, Edith Lehm, in 1929. Their son, Joseph Benedum Trees, was born autistic in 1931. Though he struggled against a variety of ailments, Joseph Benedum lived a long life; He passed away in 2011, at the age of 79.

Trees owned 2,600 acres of land, where he cultivated apple trees and built his family’s home in the early 1900s. Treesdale Farms was sold in 1990 to the Trees Development Company; the residential community of Treesdale in Pine Township was developed on the land. Today, St. Barnabas Land Trust owns Treesdale Manor. The Pitt graduate remained close to the University, serving as President of the Board of Trustees for some time. He donated large sums of money to the university over the years, and received the honor of having two university properties named after him. Trees Hall is still active today, though the baseball and softball fields in the Trees Field complex is used less since the opening of the Pitt Sports Dome in 2017

Though still active until his death, Benedum slowed down, allowing his nephews to work for the family interests and take over some of his duties in the 50s. Benedum left an estate of $70 million; half went to his nearest relatives and half went to fund the Claude Worthington Benedum Foundation. Today, the foundation has nearly $400 million and makes grants to entities in Pennsylvania and West Virginia. The Benedum Center in downtown Pittsburgh was named in honor of the Claude Worthington Benedum Foundation, which was the largest contributor to the restoration of the theater.