A Journey into Pittsburgh’s Early Years 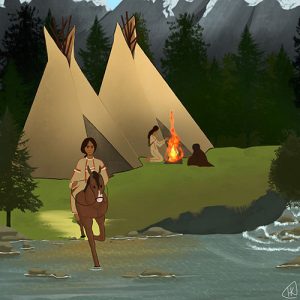 Pittsburgh is a city that is proud of its heritage. Monuments and buildings are dedicated to its steelworkers, bridges are named after its artists, military, and sports heroes alike. The history is rich and its pride strong. But before the tall buildings overtook the skyline around The Point, or George Washington nearly died attempting to cross the Allegheny River near Washington Crossing Bridge – known to most of us as the 40th Street Bridge – this land told a different story1.

Prior to European settlement in the early 1700s, the land in and around Pittsburgh was strictly inhabited by indigenous people and wildlife. Around 15,000 to 20,000 years ago, what we view as Pittsburgh was foraged and hunted on by paleo-indians; though, the exact dates that they arrived in the area are disputed within the scientific community2. What’s interesting about the history of the region around Pittsburgh is that it’s thought to be one of the first places in the New World where ancient settlers arrived. Exactly how they landed here is unknown, but evidence points to the Meadow-croft Rockshelter in Avela, PA as being one of the earliest sites for human habitation in the United States3. That means within an hour of Pittsburgh, possibly sits the cradle of New World civilization.

Around 2,000 years ago, near what is now McKees Rocks4 , a culture of people called the Adena people lived. The Adenas built burial mounds as a way to honor their dead. There is a site in McKees Rocks for one of their mounds that is the largest of its kind in Southwest PA, sitting at 15 feet high by 85 feet wide. Following the Adena, came the Hopewellian people. Their culture lasted for around 400 years, and they were more advanced in certain ways than the Adena. Their mounds were more ornate than their forefathers and they managed to network through other regions5. These two cultures of people spread further than the Pittsburgh region, but stayed mainly in the Ohio Valley. As time went on, the ancient humans evolved from their more primal ways. Tribes formed, languages evolved, and what is now, the United States had its indigenous people, made up of more than 500 indigenous tribes6. Each tribe has its own culture and history. From the Hopewell culture came the Monongahela people, who inhabited the southwest region of the state. Their territory also spread beyond Pittsburgh into West Virginia, Maryland, and Ohio.

The landscape of what Pittsburgh would have looked like around the time of the Monongahela people would be far different than today. Instead of brick homes and storefronts that fill Pittsburgh’s landscape, this culture lived in stockade villages with circular homes7. They tended to live near rivers, including the Monongahela River. They farmed corn, created pottery, and hunted deer. It’s not hard to imagine their villages having rows of cornstalks growing, while deer hides tanned in the sun, and pottery pieces were used within their homes. The Monongahela people also traded with the Europeans and other tribes. The final history of the Monongahela is not known. At some point the tribe dispersed or was possibly killed through disease. 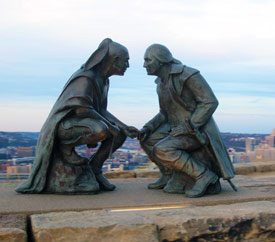 The region around Pittsburgh had quite a few tribes. The names of many of the places in the region are of Native American origin, including Aliquippa. Aliquippa was the name of one of the Seneca tribe’s queens. In fact, Aliquippa, PA has its roots as a trading post from around the 1750s. The post was used by the Delaware, Iroquois, and Shawnee Indian tribes8. This suggests that the Aliquippa area was quite busy with the tribes trading amongst each other and with the European settlers.

Another tribe that has its roots to the Ohio Valley and Pittsburgh area is the Osage Nation. They have been working to retrace their roots through the Midwest and East. The Osage Nation’s ancestral territory spreads from Southwestern Pennsylvania all the way west to parts of Colorado, Kansas, Missouri, and south into Louisiana, Arkansas, Oklahoma, and a few other states9.

Pittsburgh was full of movement long before Route 28 was ever conceived. Different nations traded or lived along the rivers. It’s no doubt that the three rivers were a great resource for the people living in the area. Some of the tribes followed the food, while others were a bit more stationary. What is now your neighbor’s backyard, could very well have been the hunting grounds of some of Pittsburgh’s indigenous people. As more European settlers landed on the East Coast, more tribes were forced West. These displaced peoples would have worked their way through the Ohio and Allegheny Valleys10.

The evolutionary history of Pittsburgh’s indigenous cultures is vast, and their legacy is spread throughout the area. When driving around or looking at a map keep an eye out to see where the indigenous people are remembered through names: Hopewell, Aliquippa, Seneca, Monongahela. If you feel like going on an adventure, you can take a tour of the Meadow-croft Rockshelter and see where it all possibly began. The Fort Pitt Museum also contains artifacts of the indigenous people who traded at the Fort. One other resource for those interested in the indigenous history of the region is the Council of Three Rivers American Indian Center. They are located in Dorseyville and offer resources for indigenous people, and they hold an annual Pow Wow that offers a “perspective of Native American culture,” as stated by their website.

Bird, Michael Yellow. 1999. “What We Want to Be Called: Indigenous Peoples’ Perspectives on Racial and Ethnic Identity Labels.” American Indian Quarterly, Vol. 23, No. 2 1-21.

Britannica, The Editors of Encyclopedia. 2018. The Encyclopedia Brittanica. February 8. https://www.britannica.com/place/Aliquippa.

Shreeve, James. 2006. “The Greatest Journey: The Genes of People Today Tell of Our Ancestors’ Trek Out of Africa to the Far Corners of the Globe.” National Geographic.