An Omelette at Don’s Diner

Don’s hasn’t stayed in business just because of a great location for walk-ins. They haven’t benefited from being on a busy highway or just off a well-traveled expressway. Don’s has thrived by delivering good food with friendly service. Don’s Diner is a destination. I encourage you to put the address into your GPS system before you set out for this Pittsburgh treasure. 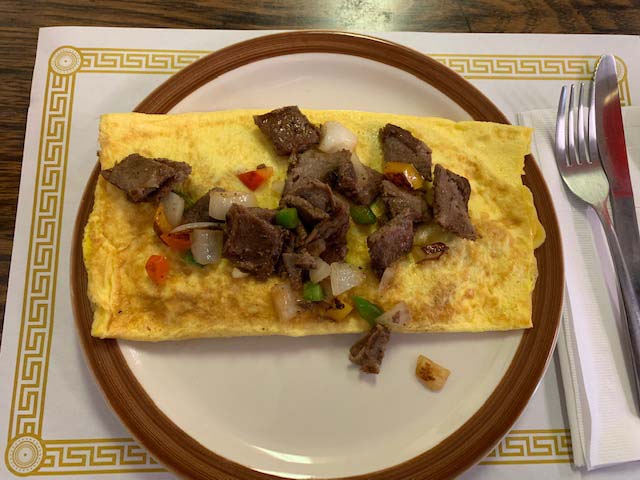 I recently showed up at Don’s for breakfast, and I was greeted with a friendly hello. The six booths to my left were all occupied, and the first six of the 12 stools in front of the counter to my right were full. I walked to a counter stool in the back of the restaurant near the grill. As I made my way to my stool, I saw the large “Let’s Go Pittsburgh” banner on the back wall. Don’s has a friendly feel. As a waitress approached me with a menu, another waitress near the front door greeted a customer with, “Hey Joe, what do you know?” Don was focused on the eggs, omelettes, pancakes and burgers he was preparing.

After a minute of examining the menu, I placed my order: coffee, Philly and Cheese omelette with wheat toast. In the few minutes I spent waiting for my food, I heard a guy next to me order a Wet Judy.

I had to ask the stranger a few stools away from me, “What’s a Wet Judy?”

“The best sandwich in Pittsburgh,” he immediately replied.

While I never take the term “the best” seriously, I heard so many people order enough Wet Judy sandwiches for me to promise myself that I’ll have to come back and check out what seems to be a favorite at Don’s.

A minute later I was enjoying my coffee. I looked at the grill and noticed that an omelette was being beautifully folded and a half dozen other orders being prepared. To tell you the truth, I was only interested in the omelette. If I were cooking, I would need a half dozen different timers to keep everything straight or a few microwave ovens. I didn’t see any timers or microwaves at Don’s; I only saw Don’s back as he stayed focused on his mission.

My three-egg omelette was served filled with steak, cheese, onion, and peppers before I had a chance to finish my first cup of coffee. One taste and I, once again, realized why this place stays busy.

Fifty minutes after entering the Eckert Street restaurant, I was ready to go. It had been a good experience. Great food, great service, friendly atmosphere. I couldn’t ask for anything more. I don’t know what Don looks like; he never turned away from the grill. But I do know that he serves food that does not disappoint.

When you arrive at this eatery for the first time, you may have the feeling that you’ve seen this place before. You may have; Don has allowed Hollywood to use this location for several feature films including Nick Nolte’s Warrior and The Next Three Days starring Russell Crowe. And in the zombie movie 12/24, Don even has a part.

As I mentioned before, I personally try to stay away from the phrase, “The Best.” But I was surprised to see a few best breakfast lists that didn’t mention Don’s and was more surprised to see some of the places that had made these lists. Sometimes I think you can’t believe anything you see on the Internet. (Unless, of course, it’s on Popular Pittsburgh!)