An Interview with Brooklyn Based Band Charming Disaster 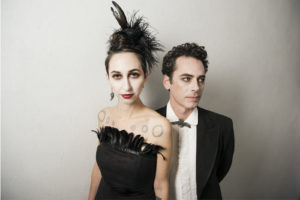 Embodying both the devilish and divine, Brooklyn based goth-folk duo, Charming Disaster, is set to perform at the Wigle Whiskey Barrel House and Beer Garden on 1055 Spring Garden Avenue from 7-9pm on July 27th. This is not Charming Disaster’s first time playing in Pittsburgh, but their return is greatly anticipated from fans and local music lovers alike as they will perform songs from their newest album, Spells and Rituals. In anticipation for their performance, Popular Pittsburgh  was able to interview the group to learn more about their musical journey.

Q: How did you first find your way to music?

A: We met at a bar in Brooklyn where Jeff’s other band was playing one night. Ellia struck up a conversation and at some point we decided it would be a good idea to try writing songs together. We were both songwriters and bandleaders of our own large ensembles, but collaborating in this way as songwriters was not a thing either of us had ever done before (or even considered). We’re still not sure where this idea came from.

Q: How has your music evolved since you first began playing?

A: In our live shows we’ve been interested in exploring how much we can do within the limitations of performing as a duo – from singing harmonies, to singing different parts at the same time, to adding foot percussion to our ukulele and guitar playing so we can create a full band musical experience with just two people. In the recording studio we’ve been able to expand the instrumentation and allow for more experimentation with sounds and arrangements, and our albums have gotten increasingly ambitious in terms of rhythmic elements and tonal palettes. Basically our songs get harder and harder to play, which makes us step up our game as musicians

Q: What is the story behind your name, Charming Disaster?

A: It’s a description of both what we do (charming disaster like charming a snake) and who we are: light and dark, humorous and macabre, friendly and frightening, blessed and cursed. Are we destined for greatness, or doomed to fulfill a terrible prophecy? Only time will tell.

Q: Your songs are deeply poetic and hauntingly beautiful. On your website, you state that Tim Burton and Edward Gorey serve as your inspiration. How has the artistry of Burton and Gorey influenced your works?

A: We share those artists’ playful approach to dark subject matter, and like them we have a deep appreciation for mordant, macabre humor. We love their visual aesthetics, which are both retro and not specific to any particular time, evoking an imaginary history. We also draw a lot of inspiration from literary sources – everything from comic books to the classics – and other visual artists, from Remedios Varo to Dame Darcy.

Q: This is not your first time performing in Pittsburgh. What is your favorite part of performing in this city? Do you have any favorite spots to visit while you are here?

A: We love going to the Pittsburgh Center for Creative Reuse, where you can find all kinds of treasures and materials to make art out of (we even performed there last time we were in town). The Center for Post-Natural History’s idiosyncratic exhibitions are right up our alley. And we’re hoping to visit either the Bayernhof Museum or Trundle Manor for the first time during this trip.

Q: What is your favorite song to perform?

A: We have a couple of songs where we leave the stage and go out into the audience to interact with people: “Deep in the High” and “Baba Yaga.” Those are the most fun to perform–there’s a real sense of danger that comes with breaking the fourth wall, and the element of chance means nobody knows exactly what will happen next (not even us).

Q: How is your newest album, Spells and Rituals, different from your previous albums?

A: In SPELLS + RITUALS we’re continuing to explore the universe we’ve established in our other albums (Love, Crime & Other Trouble and Cautionary Tales), which is populated by criminals, con artists, circus performers, and mythological beings. Our songwriting has matured, so the new album is more musically sophisticated. It’s a little deeper and darker, like a bar of good chocolate.

Whether you have heard Charming Disaster perform previously or are interested in seeing their perfectly paradoxical music come to life, don’t miss them at Wigle Whisky July 27th. It is also important to mention that they will also appear at the Confluence science fiction / fantasy literary conference  on July 26 at 8 pm.