The Duquesne Incline: A Ride Back in Time In the movie Back to the Future, teenager Marty McFly goes back in time by way of a souped-up DeLorean and the help of an eccentric scientist. But you don’t need an old sports car or the assistance of Doc Brown to go back in time. All you need is a visit to Pittsburgh’s Duquesne Incline.

The Duquesne Incline, located at 1197 West Carson Street (not to be confused with the Monongahela Incline, which is near Station Square) opened on May 20, 1877. After many decades of shuttling people up and down Mount Washington, the incline fell into disrepair, so in 1963 local residents came together and formed a nonprofit organization called The Society for the Preservation of the Duquesne Heights Incline. The Society’s goal is to restore and preserve the incline for future generations.

“At one time Pittsburgh had 15 passenger inclines,” said Mark McNally, manager of the incline. “Samuel Diescher, a German engineer, designed the incline to provide access to Mount Washington so that that area could be opened for development.” McNally started working at the incline while in college, and he knows the incline’s history well. “The Duquesne Inclined Plane Company operated the incline from its opening in 1877 until 1962.” Painstaking attention to detail and historical accuracy were employed when restoring the incline. The society worked with the Pittsburgh History & Landmarks Foundation to restore and rehabilitate the cars, equipment, and both stations to establish it both as a commuter facility and visitor attraction. As a result of their efforts, the Duquesne has been registered with the Pittsburgh History & Landmarks Foundation Historic Landmarks, the U.S. National Register of Historic Places in Pennsylvania, and The National Historical Mechanical & Engineering Landmark.

Considered a working museum, The Duquesne Incline boasts artifacts from Pittsburgh’s history, a gift shop, and an observation deck. “We have one of the most extensive selections of Pittsburgh post cards in the area and many one-of-a-kind items that have been made exclusively for the incline,” said Margaret Sommerer, who has worked in the gift shop for 12 years and doubles as an ambassador for the city. “People come from all over the world to visit the incline. Many of the tourists take my picture. Pictures of me are in places like China, Japan, and Australia.”

Tourism and the Duquesne Incline

Tourism is the incline’s life’s blood, with tourists making up 75 percent of the ridership. According to Tom Reinheimer, Office Manager and Marketing and Tour Director, last year 482,000 passengers took a ride on the incline. “We get tour companies and school students on field trips from all over the area who make it a point to include a visit to The Duquesne Incline on their itinerary,” said Reinheimer. “This is the incline to visit in the city. We have tours, a museum, free parking, and an observation deck. It’s a lot more than a trolley ride.”
A visit to The Duquesne Incline is such a unique experience that Boy Scouts and Girls Scouts can earn a special incline patch for learning about it and taking a ride. The incline can be a busy place-in the summer it can receive 4,000 visitors a day. It gets so busy that Mark,Tom, and Carol can’t spend as much time with their visitors as they would like, so they have come up with 10 of the most often asked questions at the Duquesne Incline.

If you enjoyed this article check out the link below! 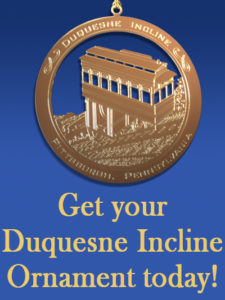