Easter Traditions: Why Do We Do the Things We Do? I was sitting in the sauna with a few other women, one of whom was Chinese. She asked one of the others there if they had a nice Easter? The woman replied that she did. Then the woman from China posed a question that stumped all of us sweating in the sauna. Why do people eat ham on Easter? No one could offer a reason, which prompted the questions: Why do we do the things we do at Easter?

Easter is when Christians around the world celebrate the resurrection of Jesus from the dead after his crucifixion on Good Friday. Unlike Christmas whose occurrence was not explicitly detailed in the Bible, we know that the first Easter Sunday occurred in spring, because Jesus was executed during the time of the Jewish Passover, which is observed in the spring. The significance of the resurrection is that in suffering for our sins, Jesus saved us from sin and death, meaning that when we pass from this world those who follow him will enjoy new life in heaven. As such, many of the traditions associated with the holiday have to do with new life and spring.

Eggs have long been a symbol of new life. They also symbolize the tomb from which Jesus emerged when he rose from the dead. There are many theories as to why we decorate eggs. One legend says that Mary Magdalene brought a basket of eggs with her to Jesus’s tomb, and when he spoke to her, the eggs transformed into the various colors of the rainbow. Another legend involves King Edward I of England, who is believed to have had dozens of eggs decorated and given to the royal household in 1307.

We all know rabbits reproduce, well, like rabbits, so naturally they are a symbol of new life. Some claim the bunny became associated with Easter because the ancient Greeks believed that rabbits could reproduce as virgins. The rabbit then became associated with the Virgin Mary. It is believed that the Easter Bunny came from the German-American Protestants who told children the tale that if they were good, the bunny would hide decorated eggs for them.

Flowers decorate many churches and are also given as gifts at Easter. One of the most beloved blooms is the Easter Lily. It is associated with the resurrection because, like Jesus after his death, the lily bulb lies buried in the ground.  Then from the earth new life arises. The white trumpet-like flower symbolizes the purity of Jesus, and the trumpet shape recalls Gabriel’s trumpet call to rebirth and new life.

The tradition of wearing new clothes on Easter has dimmed somewhat in recent decades, but many remember buying new outfits to wear on Easter Sunday. If you grew up prior to the 1970s, you may remember getting a new dress, shoes, spring coat in a pastel color as well as gloves, purse, and new hat to celebrate the occasion.  Boys got new suits, shoes, shirts and ties. This tradition recalls the newly baptized Christians who wore white linen robes at the Easter vigil to signify that they were cleansed of sin and have put on the garment of salvation.

There is no religious significance or traditions associated with chocolate eggs or rabbits, but since chocolate makes everything better, it was Englishman John Cadbury who popularized chocolate eggs in the late 1800s. Chocolate rabbits and jelly beans soon followed.

Many people eat lamb for Easter because that is what Jesus and the Apostles ate during the Last Supper. But many other people in the United States eat ham. Before refrigeration, hogs were slaughtered in the fall and their cured meat wasn’t ready to eat until spring, right in time for Easter.

Even though we may not always be aware of  it, there is often a reason for doing the things that we do during the Easter season. 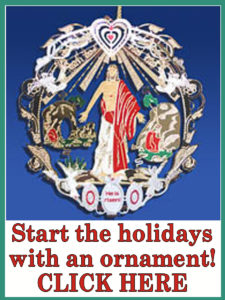