Explore the Mummies of the World 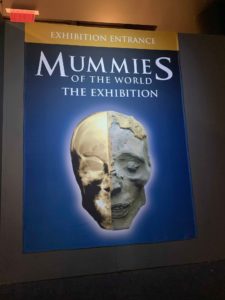 When mummies are mentioned, images of Egypt or classic horror films with Boris Karloff tend to come to mind. It is true, Egypt had mummies, but what many don’t know is that South America had them 9,000 years before the Egyptians. The Carnegie Science Center’s Mummies of the World: The Exhibition expands the horizon on mummies and shows that mummification practices have spanned the globe for centuries. The exhibit, that is running now through April 19, 2020, features 125 different mummies from all regions of the world.

Learning from the Past

The exhibit begins with a short introduction video, after the video, attendees will come face-to-face with an Egyptian sarcophagus. From there, visitors will embark on a journey through the world of mummies in an immersive exhibit. Each section of the exhibit will explain how different mummies were created in different regions, as well as the history of the individuals on display. Instead of simply seeing mummies, viewers will get to know characteristics about the once living people they’re visiting. While most people are familiar with what some might consider “traditional” mummies, the exhibit exposes viewers to bundle mummies, shrunken heads, the unique bog people, and even a North American mummy from as recent as 1994. 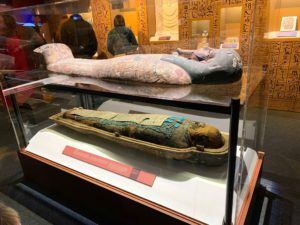 Highlights from the exhibit include the mummy of Nes-Min, an Egyptian priest from the temple of Min. What makes Nes-Min unique from other Egyptian mummies is what’s peeking out from beneath his wrappings. In Egyptian mummification, all organs were removed, except for the heart. A scarab beetle would be placed over the heart during the mummification procedure. In Nes-Min’s case, he has an extra scarab beetle placed in the top of his skull. Visitors are able to see the scarab and the intricate wrappings and sarcophagus of Nes-Min, as well as the mummy of another priest from the temple Min, Nes-Hor.

No mummy exhibit would be complete without the mention of Tutankhamun. National Geographic has loaned its silicone skin reconstruction of the Pharaoh, that was created using 3D CT scan data. It includes a short video documentary that explains the process of creating the realistic bust. 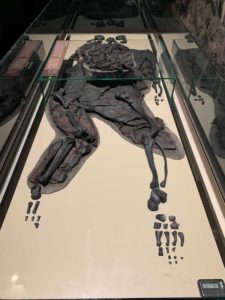 A Bog Body laid out in the human form.

The Mummies from South America section includes Incan bundle mummies. Instead of the mummies in the typical laying posture, the bundles mummies were bound tight in fetal positions and wrapped in grass cords, creating a small bundle.

Arriving from Far and Wide

Seldom seen outside of the Europe are bog bodies. On special loan from the Drents Museum in the Netherlands, is a female bog body. Jess Rietz, a Carnegie Science Center employee and archaeologist explained, “These never leave Europe. It’s very special that we have one in this exhibit.” A unique feature of a bog body is that unlike other mummies, their bones are malleable instead of hard or brittle. When asked if she found the exhibit to be eerie, she laughed, “No. I’m an archaeologist. I can walk through without any lights on and be comfortable.”

Activities for all Ages

Children will love the “What Does a Mummy Feel Like?” interactive exhibit, where they can feel panels on the wall that resemble the variety of textures from different kinds of preservation, including bog bones, embalmed skin, linen, and fur.

If you’re curious about whether your children will enjoy the exhibit, Carnegie Science Center has created a family guide that will help you to determine if it’s right for your family.