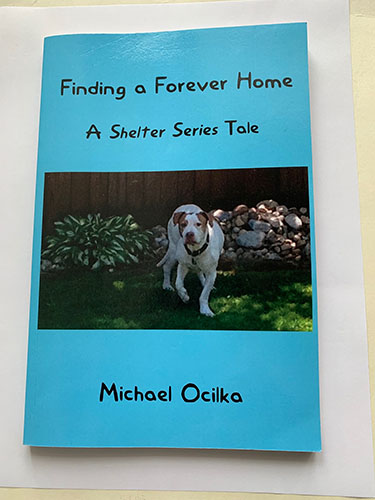 It was a dark and stormy night. A dog, lost, hungry and afraid, seeks refuge in an abandoned garage. He is eventually discovered and taken to a local pet shelter by a sympathetic police officer. And so begins the tale of Ducky, named by a shelter employee for his peculiar appearance, part Pit Bull, part Basset Hound, making him an “odd duck” indeed.

The book by Michael Ocilka goes on to chronicle Ducky’s first days, weeks and months at the shelter, as he is evaluated physically and behaviorally and begins to make friends with the staff and other canine residents. The story is told from the point of view of the animals, each of whom has a distinct personality. Early on, Ducky meets his first friend and mentor Yinzer who shows him the ropes of shelter life and explains the meaning of such terms as “house trained, ” “adoption days” and “forever home.” For a dog whose life up to this point consisted of being chained to a tree outside his doghouse with no exercise or human companionship, Ducky adapts surprisingly quickly to shelter life.

Along with the story of Ducky’s shelter experiences and quest for his “forever home.” the author includes information on a variety of topics, such as how animals come to be at a shelter in the first place and the role a shelter plays in the lives of stray, abandoned or unwanted dogs. As Yinzer points out, “it is a good place to stay while we are waiting for a happy ending.”

Ducky initially assumes he will be selected quickly, but when he is passed over in favor of other dogs, he becomes confused, depressed and broken hearted. As time passes, he settles in to the role of a mentor to dogs who are new to the shelter. Will Ducky himself ever have a loving home? Will he ever find an owner who sees his differences as assets and loves him for who he is?

Ducky’s tale can be read by adults and children alike. As a chapter book, it would benefit from accompanying illustrations or more photos. It can be used as a teaching device to introduce elementary school children to the idea of shelter animals as pets. A set of accompanying questions after each chapter would help to engage the school age readers in discussing such larger topics as being different, dealing with bullies, and making friends.

As the full title of this story indicates, Finding a Forever Home is part of a series, and the story is not over. With the large number of shelter animals waiting to go home, Michael Ocilka has many opportunities to continue the tale.

To purchase your copy of Finding A Forever Home, please go to www.mikeocilka.com

A portion of the proceeds goes to Animal Protectors, Ducky’s shelter. Thank you for your support!