Greeks in Pittsburgh: From a Small Country to a Large Presence

Greece has made a huge impact on the world. The Greeks have made enormous contributions to architecture, philosophy, theater, politics and government, sports, mathematics, science, and medicine: literally all of Western Culture.

Like the diminutive size of their homeland (it’s about the size of Alabama), the Greeks who came to Pittsburgh were few in number when compared to some of their other ethnic counterparts, such as the Germans, Italians, or Irish. Nevertheless, that small number of Greek immigrants who did settle here contributed to making Pittsburgh a great place to live or visit.

The first Greeks arrived in the region in the late 1800s. Many of those who came here intended to earn some quick money and then return home. Who could blame them? It must have been quite difficult to come to Pittsburgh from their sun-splashed homeland surrounded by the brilliant blue waters of the Aegean, Ionian, and Mediterranean Seas, one of the earth’s oldest civilizations, to a land that must have seemed like a wilderness.

Because the Turks had dominated the Greeks for nearly 400 years, until the War of Independence in 1821, many of the workers who came to Pittsburgh were typically unskilled and found work wherever they could. According to The American Hellenic Foundation of Western Pennsylvania, by 1893, there were about 50 Greek immigrants in the city, most of whom were sailors from the various Greek islands. Most did manual labor but then, after a time, they began to open their own businesses.

Since many of these immigrants intended to return to Greece, few Greek women came to Pittsburgh initially. According to the book They Came to Pittsburgh by Clarke Thomas, it was estimated that there were “300 to 400 male Greeks before any women came, the first arriving about 1903.”

For the women who did come to Pittsburgh, life was particularly difficult. Unlike other ethnic groups who settled in “clumps” around the city, like the Italians in Bloomfield, the Germans on the North Side, and the Polish on Polish Hill, there was no “Greek Town.” These immigrants were scattered throughout the area. Since they intended to return to their homeland, most of the women didn’t learn to speak English. They devoted themselves to tending the home, working in their church, and preserving their “Greekness.”

Some of those immigrants did go home. In 1912, it is estimated that 20 percent of the Greek men living in Pittsburgh left to return to Greece to fight in the Balkan Wars that came before World War I. Those who remained, and those that followed later, quickly came to realize that to achieve the American dream they would need to strike out on their own. Many opened restaurants, confectionaries, and coffee houses.

While life at times was uncertain for the Greek immigrant, one stabilizing factor for them was their Greek Orthodox faith. Eight Orthodox Metropolises comprise The Greek Orthodox Archdiocese of America, and Pittsburgh is one of those eight Metropolises. It tends to the spiritual needs of Greek Orthodox parishes and monasteries in three states: Pennsylvania, Ohio, and West Virginia. The Metropolis office is headquartered on Ellsworth Avenue. There are nearly a dozen Greek Orthodox churches in the Pittsburgh area.

Although many of the immigrants lacked financial means, they felt it important to build churches in which to worship. In 1923, St. Nicholas Cathedral, on Dithridge Street in Oakland, became the seat of the Pittsburgh Metropolis. That same year, Holy Trinity Greek Orthodox Church was established on Pittsburgh’s North Side to accommodating the swelling Greek population in the area. Holy Trinity has since relocated to McCandless Township.

One of the most beautiful elements of a Greek Orthodox Church is its iconostasis, which is the wall of icons separating the nave from the sanctuary. Often these are gilded and awe-inspiring works of art, as well as sacred artifacts.

In addition to tending to their spiritual needs, the Greek Orthodox Church also provided a way to preserve the Greek culture. Many of the churches in the area offer ministry and social groups, as well as Greek language lessons.

Since the Greeks in the area were not in great numbers, and many were intent on returning to their homeland or were fearful of losing their heritage, they often found themselves a bit isolated. However, delicious cuisine has a great way of breaking down barriers. Many of those in the area who are not Greek have come to know and appreciate their Greek neighbors through food.

Throughout the summer months, many of the Greek Orthodox churches in the area hold food festivals, which attract throngs, and have become events Pittsburghers look forward to every year. It’s likely that more meaningful connections between those of Greek heritage and other ethnic traditions have been made over souvlaki and baklava than in any other way.

Like many of the other ethnic groups in the area, the Greeks have their Kennywood Amusement Park Day and a classroom in the Cathedral of Learning’s Nationality Rooms. The Greek room was dedicated in 1941, and pays homage to the nation’s illustrious heritage by featuring Greek architecture and motifs. As a tribute to this ancient land, the backs of student’s chairs are emblazoned with the names of Greek cities, and the Professor’s and guest lecturer’s chairs are named Plato, Aristotle, and Socrates.

While many of the Greeks came to the area intending to return home, our city has been deeply enriched by those who chose to stay and make Pittsburgh their home. 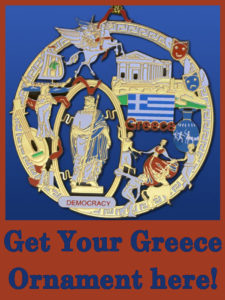 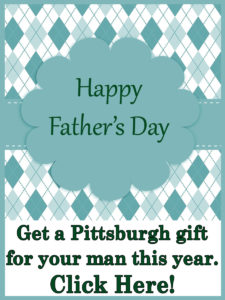