Greener Than Ever at Phipps Conservatory and Botanical Gardens! 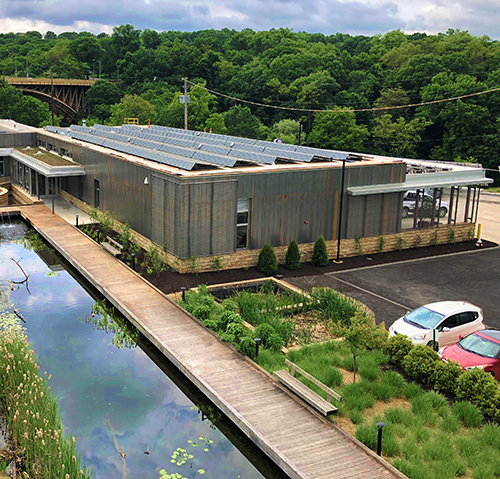 Phipps Conservatory and Botanical Gardens in Oakland has always been one of Pittsburgh’s most notable green spaces, but Phipps has gone beyond the green of its plants and flowers by being one of the “greenest” campuses in the world.

Phipps, which was founded in 1893 by real estate magnate Henry Phipps, is listed on the U.S. National Register of Historic Places and encompasses 15 acres, including a historic 14-room glasshouse plus 23 distinct indoor and outdoor gardens. In 1993, Phipps became a privately managed, non-profit organization, though still owned by the city. Phipps attracts nearly half a million visitors annually and has long been a beloved institution in the city. However, it has not been content to rest on its laurels and has transformed itself into an exemplar for creating healthy green spaces and for building some of the world’s greenest buildings.

Leading these transformations is Richard Piacentini, president and CEO of Phipps, who has been on board since 1994. Phipps was in disrepair when he took over its care. He knew they need to revamp the outdated glasshouse and Welcome Center. “We recognized that we had an opportunity here to do things right and create a building that reflects concern for the environment,” said Mr. Piacentini. In 2005, Phipps opened its innovative Welcome Center, becoming the first LEED-certified visitor center in a public garden. Since then the accolades and awards have continued to accumulate, citing Phipps as a world leader in exploring the intersection of the built and natural worlds and how it relates to both human and environmental wellness. The Welcome Center’s eatery, Café Phipps, was named a 3-Star Green Certified Restaurant in 2009 and was also named a “Best Museum Restaurant” in the U.S. by Food & Wine Magazine. The café features food that is grown locally, organically, and on-site.

The Tropical Forest Conservatory, a 12,000-square-foot, state-of-the-art glasshouse opened in 2006. “It is the most energy-efficient conservatory in the world,” said Mr. Piacentini. “Its design helps it to maintain more consistent temperatures year-round. It’s cooler inside the conservatory in summer and warmer than the outside in colder weather.”

In 2012, the Center for Sustainable Landscapes opened as a site for research, education, and administration and has been awarded the four highest green building certifications–the only facility to be so honored: Living Building Challenge™/ Net-Zero Energy certified; First WELL™ Platinum Building; Highest number of points for LEED® Platinum v2.2; and First SITES™ Platinum Certification. In addition, the Center for Sustainable Landscapes has been honored with more than 80 prestigious local, national, and international awards. “The center generates all of its own energy and treats all storm and sanitary water captured on-site, taking the burden off the area’s infrastructure,” said Mr. Piacentini.

The Nature Lab, a modular learning facility, has expanded Phipps’s capacity for hosting children’s programs. All the lab’s mechanical, electrical, and plumbing systems are exposed, making the lab an interactive learning tool and allowing students to not only learn about the lab’s design, but also see it at work.

Recently, Phipps continued its commitment to being a leader in sustainable building design and construction with the opening of its new Exhibit Staging Center. Formerly an old public works building, the ESC showcases the latest advancements in green building technology on an existing site, transforming a dilapidated space on a former brownfield into a safe, healthy environment for people, plants, and animals.

Some of the ESC’s features include the use of geothermal wells to efficiently heat and cool the building by harnessing the natural energy from the earth’s consistent 55-degree internal temperatures. Photovoltaic solar panels on the roof provide energy to power the building and NanaWalls are used to increase sunlight and air flow on warm days. A green roof over the vestibule helps to manage stormwater. “All of the technology employed at Phipps is off-the-shelf,” said Mr. Piacentini, making it available for any other entities who want to follow Phipps’ lead. “We get visitors from all over the world who come here to learn about what we’ve implemented here.” 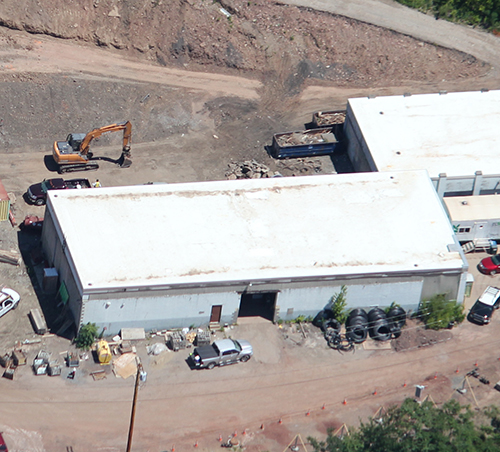 Maintenance staff and grounds crew, a group whose well-being is often overlooked, are the primary occupants of the ESC, which is designed to ensure that the health and well-being of all staff members is a top priority. To enhance the guest experience, the ESC will be open to visitors for a unique behind-the-scenes look at the conservatory’s past and future flower shows. Guests can enter a vestibule to see future display props being constructed and an adjacent window will provide views of historic topiaries and props from past show displays. With additional features including a yoga studio and fitness center, Phipps’ ESC will set the standard for healthy existing buildings, debuting as one of the greenest structures of its kind.

“Phipps now has three of the greenest buildings across the whole spectrum. We have examples of what can be achieved in new construction, in a modular building, and in a renovation of an existing structure and brownfield site,” said Mr. Piacentini. These world-renowned innovations are leaving others in the industry green with envy and have established Phipps as not only one of the globe’s best botanical gardens and conservatory, but also as one of the best examples of what can be achieved in sustainability.

Be sure to call ahead before planning your trip to Phipps for the latest updates on hours and safety policies.