My happy new life in The ‘Burgh It’s been less that a year since I left Mexico. What can I tell you?

Actually, quite a lot.

I had never, ever thought that I would live permanently somewhere else besides my country. It had crossed my mind but I never conceived the idea of actually saying ‘goodbye’ to my hometown nor end up living in the historical Pennsylvania with the love of my life (a proud Pittsburgher) and my beloved cat, Poupée.

My husband and I are “late bloomers”, we were older when we met. Neither of us had ever been married or had kids. So we tied the knot in our forties circa two years after dating and I started a new life in The Steel City surrounded by such a kind community. I can only say by experience that Pittsburgh people are delightful and kindhearted. They are hard workers that know how to balance the jo of life and the love of country, but most of all… The love of city.

I come from Monterrey, Mexico, a business oriented city in the north that obtained industrial growth due to a large steel producing company. People from Monterrey are very proud of their city, too, they are fanatics of their local soccer teams as well as eager followers of American Football due to the geographical proximity to the US. And they love The Steelers (even more than The Dallas Cowboys considering Texas is just over 140 miles away from Monterrey).

Only this past November 13, 2016, more than 500 Steelers fans from Mexico traveled all the way to Pittsburgh just to watch The Black and Gold play against the Cowboys at Heinz Field, according to The Steelers official site, and most of them came from my hometown. I’m not a sports girl but I’ve been told that by living in the City of Champions I will eventually “convert”, and well… Just a few months after I arrived in Pittsburgh The Penguins took home the Stanley Cup! The ‘Burgh went mental when their team beat the San Jose Sharks. The city was on fire and the fans flooded the streets in celebration.

My new family and friends in Pittsburgh have been a crucial factor for my adjustment since I came to live here in April, 2016. They have helped me to acclimate and offered to help without hesitation. I consider my in-laws my new parents and my husband’s siblings as my brother and sister, too. It’s all about adapting and this town is the best.

When I lived in Mexico, I was an editor for newspapers throughout 14 years. I studied Communication and although I was hesitant about my career choices after college, I finally decided to work in the publishing industry. My grandfather was an awarded journalist who made a profound impact in my life to enter the field. When I was little girl I would spend hours with him in his home office just to watch him type on his old Olivetti. By then he was already a columnist for the main newspaper in Merida, Yucatan, (southern Mexico) and a literature teacher at the State University. He was such a great mentor to me and was so adamant in my learning that by the time I was eight years old he had taught me the basic Spanish grammar rules.

In 2000 I had my first experience living outside my country. I was fortunate to be in France for almost a year to study their language. My experience in Toulouse at the Alliance Francaise was delightful but at some point I started to miss home. I was 25 years old.

I came back to my country and, shortly after, I obtained a position as a junior editor at the most important newspaper in town and one of the major journals in Mexico, Reforma. I was beyond happy and so excited to start my professional life. I worked for almost 7 years there and subsequently I edited for two more newspapers and a magazine. All this time I watched my friends getting married and starting another chapter in their lives. Somehow this kind of life passed me and instead I settled on pursuing personal goals and career choices. In my last position at a newspaper I finally became the editor of the Front Page and I was content. Who knew that not much time would pass before meeting the man I will marry and hence I would put all the pieces together.

Thereupon I met my husband. We dated for some time and when we decided to be together it took me a second to leave everything behind and come here. I always wanted to know how it felt to be with the “right one”, and it suddenly happened, I met my soulmate. And I know this might sound like a commonplace but I cannot describe what it is that makes us so sure of having found our life partner, you just feel it. So yes, I packed my bags and traveled, along with my 11 year old cat, to Pittsburgh. As I write these words Poupée is asleep and snoring so loud by my side that I can tell she is the happiest feline and the most adjusted.

Our wedding was on September, 2016. It was beautiful. We wanted something casual but fun with our loved ones so we hosted the ceremony and reception at a farm in McDonald, PA, just 50 min away from the city. Our religious service was beside a big lake at the back of the fields and we dinned and danced inside a lovely barn.

My friends and family from Mexico came to the nuptials and we all had a such a great evening. It was festive and emotional at the same time. We planned it for several months and it all came out the way we wanted it.

Now I’ve just started to create my own life here to complete my transition that began with a “Yes, I will marry you”.

I heard some things about Pittsburgh before coming here but nobody told me that this city was going to make me feel so welcomed by its great community and its beauty: a strong urban infrastructure that would make any world capital jealous and the amazing natural views.

I still remember the sight that took my breath away for the first time: the majestic view from the three rivers with its bridges that opens up widely on both sides when you come out from the For Pitt tunnel. It is pure eye-candy. I don’t know what the future holds for me in Pittsburgh but I’m very positive about it. I was granted my work permit and I’m planning on establishing my career or even explore new opportunities. I am thrilled about my life. I feel like I’m starting again like that girl back in Mexico after college and it is awesome. Plus, I’m not alone anymore. I am so grateful. 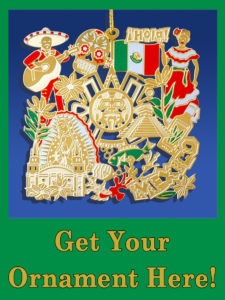