History Behind the Holiday: Hanukkah 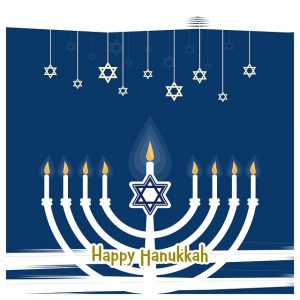 Hanukkah is the Jewish festival of lights. Beginning on the 25th day of the Jewish month of Kislev, the festival is observed for eight nights. While Hanukkah is now one of the most well-known Jewish celebrations in North America, it is considered a very minor holiday in the Jewish religion. Popular Pittsburgh has put together a brief history behind the holiday and how it came to be a popular celebration among American Jews.

For nearly half a century, Syrian Greeks ruled the Holy Land. Like most occupying oppressors, the Seleucid king, Antiochus IV ordered the Jews in Israel to forsake their God and religious observances. They were told to embrace Greek culture and the Greek gods. Some historians believe that even amongst the Jews there were two camps at war with each other. There were those who assimilated to Greek customs and those who were determined to impose Jewish laws and traditions. In 168 B.C.E, Seleucid soldiers descended upon Jerusalem, massacring thousands. They went on to desecrate a holy Temple, turning it into an altar to Zeus and sacrificing pigs as offerings to the chief god.

A rebellion broke out against Antiochus, led by the Jewish priest Mattathias and his sons. After his father’s death, Judah Maccabee, which means Judah the hammer—a name worthy of a hero or WWE wrestler—took the helm. In 164 B.C.E, he and a faithful band of Jews defeated the mighty Greek army and reclaimed the Temple. Upon their victory, the Jews cleansed and rededicated the Temple to their God. 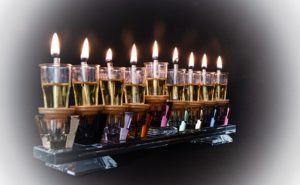 Two things seem to have happened next, which helped to create the holiday of Hanukkah. Along with the rededication of the Temple there was also a belated celebration of Sukkot, a holiday Jews were unable to celebrate properly during the Maccabean Revolt. Typically observed on the fifth day after Yom Kippur, Sukkot is celebrated with seven days of feasting, prayer, and festivities. So they lit the menorah in celebration—though they understood there was only enough oil to burn for one day. But then, according to the Talmud, Judah and the other Jews witnessed what they believed to be a miracle: the flames burned for eight nights.

The first historical references to the holiday were mentions of the Festival of Lights. Though eventually, it became know as Hanukkah, meaning “Dedication” in Hebrew.

Daily celebration of the holiday centers around the lighting of the menorah and relishing the lights. The kosher menorah has nine branches; one in the center and four on each side. The center candle is the “attendant,” or the shamash, and sits slightly higher than the rest. Each of the other eight candles are always lit from the shamash.  It is custom to light the menorah shortly after sunset or nightfall, except on Friday, when it should be lit before dark so as to avoid lighting on Shabbat. The menorah is meant to spread light to others, making its placement a meaningful decision. Ideally, it should be placed by a window or prominently displayed in a communal area. 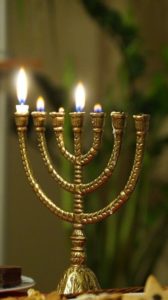 Each evening, the shamash is lit first, and a blessing is recited. On the first night of Hanukkah a candle is placed in the right-most spot and lit from the shamash. Each night, for the next seven nights, one additional candle is lit. They are always placed from right to left but lit from left to right, always lighting the newest candle first and using only the shamash as kindle. On the eighth night, all candles are lit, beginning on the left.

The final step is to relish the lights. It is customary to linger around the menorah for about half an hour. If a flame is extinguished during this time it is best to relight it (with the shamash). This is a time to spend with family, playing games, eating food, and honoring the Jewish men and women who played a role in the Hanukkah victory.

Hanukkah is a joyous holiday. One of the ways it is celebrated is by eating foods fried in oil to remember the miraculous oil that lasted for eight days. Latkes (potato pancakes) are a favorite food at Hanukkah, as are doughnuts filled with jelly. 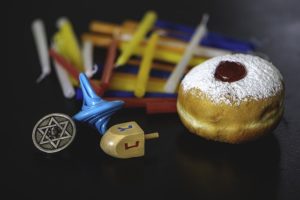 Children also play a game with a dreidel, a four-sided spinning top with four Hebrew letters on each side—nun, gimmel, hey, and shin. Each players puts either a coin, candy, or nut in a pot. The letter that lands face-up after spinning the dreidel determines what happens. Nun means nothing happens, and it’s the next players turn. If on your turn it lands on gimmel, you get the whole pot. Hey means you get half of the pot, and shin means you must add to the pot.

Because Hanukkah falls near Christmas, today, some Jews give gifts on each night of Hanukkah, but originally, they gave gelt, money, which is supposed to be given way to those less fortunate. Chocolate gold foil wrapped coins are also given as treats.