Christmas is a season for making memories.  To help remember all the things to do, many people start making lists when the holiday season approaches: shopping lists, Christmas card lists, etc. But what about a list detailing things to do to make it your best holiday season ever? The most memorable and enjoyable, instead of just a task list? What would you put on that kind of list? One of the simplest ways for making lasting, joyful holiday memories is to enjoy some of the area’s most beloved holiday traditions. The following is a list of some of those things that will help to make your days merry and bright. 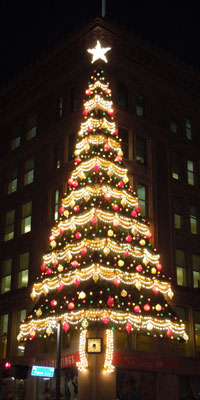 No one kicks off the holiday season like Pittsburgh. For more than five decades, the city has been drawing people to downtown Pittsburgh to usher in the holidays with Light-Up Night. Among the numerous events planned is the official lighting of the Christmas tree, the unveiling of the holiday display windows at the former Macy’s, a new public art project called Energy Flow that combines light and wind to create a temporary light display on the Rachel Carson Bridge that will highlight the city’s bicentennial, and the grand finale fireworks. Fireworks will be launched from a barge on the Allegheny River.

What’s a celebration without a parade? Pittsburgh’s Holiday Parade accommodates with floats, marching bands, and, of course, the arrival of the jolliest of elves, Santa Claus. The parade is scheduled for the Saturday after Thanksgiving.

One of the city’s newest holiday events, Peoples Gas Holiday Market, nevertheless, has been growing every year. Located in Market Square and running from late November until December 23, the holiday market is modeled after the original Christkindlmarkt in Nuremburg, Germany. Pittsburgh’s market is one of only three such markets in North America. European-style chalets feature one-of-a-kind gifts and handcrafted items from around the world and are sold by regional, national, and international vendors. Entertainment is provided by ethnic, cultural, and community groups as well. The Peoples Gas Holiday Market also supports the Greater Pittsburgh Community Food Bank. In exchange for a cash donation or a non-perishable good, visitors to the market may enter Santa’s House and receive a ticket to have your picture taken with Santa.

To cap off a fabulous holiday season, Pittsburgh uncorks the biggest New Year’s Eve celebration around. This family-friendly evening filled with fun, entertainment, and activities–and of course, fireworks–begins at 6 p.m. and ends with a bang at midnight with a spectacular pyrotechnical display. With approximately 150 events at 50 indoor and outdoor locations, First Night Pittsburgh is the region’s largest single-day celebration.

Don’t you wish you could travel around the world and experience how the holidays are celebrated in different lands? The next best thing to doing that is to visit the Nationality Rooms at the Cathedral of Learning located at the University of Pittsburgh. Starting in mid-November through Martin Luther King Day, the classrooms will be decked out in their holiday finest.

For the ultimate in model railroading, visit the Miniature Railroad and Village at the Carnegie Science Center. Since 1954, this Pittsburgh Christmas tradition has delighted thousands as they take in a miniature replica of Western Pennsylvania during the 1880s to 1930s. Although the display is open year-round, the Miniature Railroad & Village experiences the most visitors to the exhibit during the holidays. Admission to the display is included in your Carnegie Science Center ticket.

This landmark in downtown Pittsburgh turns into a winter wonderland every year as the Rink at PPG Place beckons skaters to come take a glide around the majestic Christmas tree in the center of the ice. Inside the nearby Wintergarden, the exhibit of Santas from Around the World and the Gingerbread Houses enchants children of all ages. Throughout the season, entertainment is also scheduled. 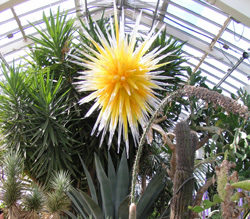 Phipps pulls out all the stops during the holidays. From its Winter Light Garden and Flower Show to Santa Visits to Candlelight Evenings, Phipps is perhaps the most serene and beautiful destination in the area for celebrating the holidays. In addition, the Gifts and Green Market is the ideal place to find unique gifts, especially for the gardener on your list.

Unveiled on Light-Up Night, the Holiday Display windows at the former Macy’s are a destination unto themselves. Children of all ages will delight in pressing their noses to the panes of glass to peer at the magical displays.

In such a stately setting, it is only fitting that it houses such an elaborate Nativity display. The Neapolitan Presepio, created by Italian craftsmen between 1700 and 1830, depicts the Neapolitan vision of the Nativity and village at the time of Jesus’ birth. More than 100 miniature figures bring the first Christmas to life.

The Winter Festival of Lights has been cited numerous times as one of the best holiday light displays in the country. Located in Wheeling, West Virginia, the Winter Festival of Lights encompasses 300 acres over a six-mile drive through a dazzling light display. It’s so beautiful that you may decide you don’t want to leave. In that case, you can book a stay at the Resort and Conference Center, which is also decked out for the holidays.

On weekends in December, children can have either breakfast or lunch with Santa. In addition, the zoo has its own way of ringing in the New Year with Noon Year’s Eve. Visitors enjoy entertainment, dancing and a noon ball drop.

Erected in 1999, the Pittsburgh Creche, located on Grant Street in the USX Tower Plaza, has in a few short years become one of the most visited Christmas destinations in Pittsburgh. The larger-than-life Nativity is the world’s only replica of the crèche at St. Peter’s in Vatican City, and it remains on display until the Feast of the Epiphany.

The Hartwood Mansion at Hartwood Acres decks the halls for the holiday season and hosts daylight and candlelight tours as well as a Holiday Musical Tea and Tour. Make your reservations early as these tours fill up quickly.

For 29 years, the nonprofit Western Pennsylvania Model Railroad Museum has hosted its Holiday Train Show. Located in Gibsonia, the WPMRM’s display opens in early November and runs through part of January.

In addition to Holiday Craft Workshops, the Frick also decorates the Frick Mansion, Clayton, for the holidays and offers tours of this historic home. One of the few remaining homes of Pittsburgh’s famed “Millionaire’s Row,” Clayton will give you a sense of how Christmases past were celebrated by the city’s elite.

In December, you can return to a 19th century Christmas village at Old Economy in Ambridge, Pennsylvania. As you walk along candlelit lanes, you can window shop and buy handcrafted items and then take in musical entertainment from local choirs. Children can make crafts and enjoy a visit with Belsnickel (Pennsylvania Dutch Santa Claus).

Returning to the Big Butler Fairgrounds is Shadrack’s Christmas Wonderland. From November 18 through January 18, drive through a three-mile spectacle of lights that will dazzle you with the holiday spirit. The magical light display is choreographed to Christmas music. 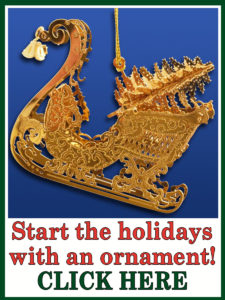