Although Kaufmann’s department store is no longer in existence, the Kaufmann’s Clock that has been attached to the what was once known as the Kaufmann’s building at the corner of Smithfield Street and Fifth Avenue, where the store was located, is still there keeping time.

Prior to this clock, there was a free-standing clock on a tall pedestal at the corner. However, since 1913, this 2,500-pound, ornately beautiful bronze clock, designed by the Coldwell Clock Company of New York, has been presiding over the crossroads of the city and has become an icon in Pittsburgh, so much so that the phrase “Meet me under the Kaufmann’s Clock” has become as ingrained in the Pittsburgh lexicon as “Here we go Steelers.”

It can’t be verified, but we have heard the tale of one young man who was waiting under the clock years ago for a date to arrive, who chatted with a young woman who was also waiting to meet a blind date. When both were stood-up, they went to dinner and before you knew it, they were married and had six kids. Such is the magic of the clock!

The clock has seen millions of Pittsburghers over the generations pass beneath it and has been witness to so many events in the life of the city—two World Wars, two pandemics, The Great Depression, the Pittsburgh Renaissance, the collapse of the steel industry, 18 mayors, six Super Bowl Championships, five Stanley Cup wins, four World Series titles, and it has outlasted Forbes Field and Three Rivers Stadium, and even the department store with which it was associated.

In 1981, the clock was designated a landmark by the Pittsburgh History & Landmarks Foundation. After so many years, the clock had accumulated a lot of grime, and in 1987, the beloved clock received a makeover. In a $30,000 refurbishing using ground corn cobs to blast the dirt away, the clock was restored to its original glory in 1987.

Unfortunately, Kaufmann’s went out of business in 2006. When Macy’s took over the retail spot soon after, people never took to calling it Macy’s clock. Macy’s shuttered their downtown store in 2015, and the 13-story building has now been developed into luxury apartments known as Kaufmann’s Grand on Fifth.

Fortunately, for Pittsburghers, Kaufmann’s clock has been ticking for more than 100 years, and for those who love this landmark, they hope it’s around for decades to come. 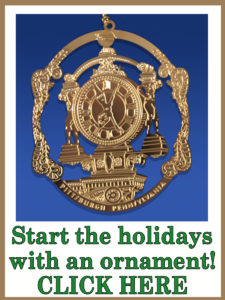