Being a fan of the Pittsburgh Penguins back in the 1970s was not always easy. The team struggled on and off the ice, so much so that they became the butt of many jokes. But times change and so has the fortune of the Penguins. The team, now approaching its 50th anniversary, has much to be proud of. To ring in the start of hockey season in Pittsburgh, try our Penguins Trivia. The NHL Pittsburgh Pirates played here in the late 1920s.
In what year did the Pittsburgh Penguins change the team’s colors from dark blue, light blue, and white to black and gold, and which NHL team protested the move?

Before there was Iceburgh, the Penguins mascot, the team had a real live Penguin mascot who sometimes made an appearance on the ice in between periods. What was this real Penguin’s name?

This Pittsburgh NHL coach was the first to change players on the fly.

Before legendary broadcaster Mike Lange came on board, this broadcaster called games for one season in 1978-79.

On March 13, 1974, while the Penguins were playing the Los Angeles Kings, this fad came to the ice.

A woman streaked the ice wearing nothing but a baseball cap

The Penguins have had at least one Dapper Dan Sportsmen of the Year in each decade since the team’s founding in 1967 but one. Which decade were they shut out?

The 1970s saw no Penguins player, or member of the management, pick up a Dapper Dan award

Four sets of brothers have played for the Pittsburgh Penguins on the same team. Name them.

Who was the first Penguin ever drafted in 1967?

Joe Daley
Who was the first non-Canadian ever drafted by the Penguins?

Czechoslovakian Jaromir Jagr
Who was the first American drafted by the Penguins?

Brooks Orpik
Who was the first Russian drafted by the Penguins?

In 1972, the Penguins set the record for the most goals in 2 minutes and 7 seconds. How many goals did they score in that short amount of time?

The Penguins hold the record for the 4th longest playoff game. They beat the Washington Capitals in the 4th overtime period 3-2 at what minute mark?

Bonus: Has a Penguins goalie ever scored a goal?

No.  Eleven goaltenders in the NHL have scored a total of 14 goals, but none were Penguins. 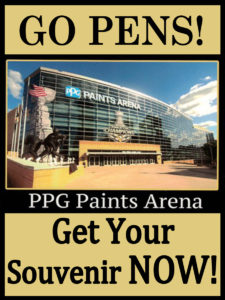