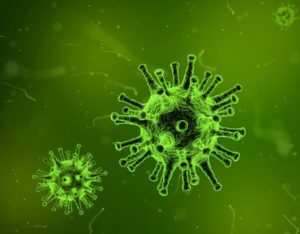 World War I was winding down when, in the spring of 1918, soldiers and citizens in Europe suddenly began to fall ill and die. The movement of troops around the globe enabled this “mystery illness” to sweep across Europe and Asia and eventually kill approximately 50 million people worldwide. The “Spanish Flu” became the worst influenza pandemic recorded at the time. The virus was so widespread and devastating that the average life expectancy in the U.S. fell by twelve years.

Symptoms of the “Spanish flu” had a rapid onset. In addition to the usual flu symptoms—chills, fever, muscle ache, and lethargy—this strain turned the victim’s skin blue and filled their lungs with fluid. Many died within hours of onset of symptoms. At that time, viruses had not yet been discovered, and prevention was a shot in the dark at best. ‘Prevention’ measures ran the gamut from eating red peppers to sprinkling sulfur into your shoes and taking quinine. Many think of the flu as preying on the weak, very young and very old, but the flu epidemic of 1918 didn’t discriminate. 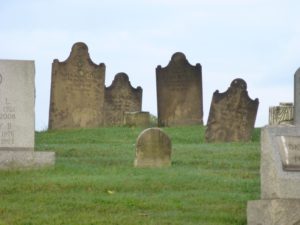 According to Pittsburgh Health Department statistics from 1919, nearly 65 percent of the cases and 57 percent of the deaths were people aged 15 to 40 years.

Pittsburgh suffered terribly during the pandemic. The area recorded its first flu victim on October 5, 1918. Four others died from the flu that week. By the next, nearly two dozen more had succumbed. The number of victims continued to grow, frightening and puzzling everyone. According to the Centers for Disease Control (CDC), the area had one of the highest death rates of any city in the nation. With 4,500 deaths, the city had astonishing infection rate of one new case every 70 seconds, and a mortality rate of one every 10 minutes. It is reported that more than 700 children in the area were left as orphans because of the flu taking their parents. Over-crowding with new immigrants is likely one reason that the area was hit the hardest. Cramped quarters make for a perfect breeding ground for the virus.

As people continued to fall ill, Pennsylvania’s Deputy Health Commissioner, B. Franklin Royer, ordered all public venues closed. Only religious services and schools were able to remain open. However, the Health Department instructed such institutions to bar anyone who was coughing or sneezing. Not wanting to take any risks, the local colleges and universities made the decision to cancel classes; Pitt, Duquesne, and Carnegie Tech all closed their doors. As more people were stricken, hospitals in the area were deluged with patients. The death toll left funeral homes filled to capacity and undertakers without coffins. It was so severe that they began to bury victims in mass graves. Today, you can find a marker in Winfield Township, near Saxonburg, to commemorate the site of a one that is believed to contain at least 24 victims, wrapped only in sheets.

By the time November 1918 rolled around, the flu pandemic in our area began to wane. Unfortunately, it was not the only pandemic to hit the Pittsburgh and the rest of the United States. The pandemics of 1957 (the “Asian Flu”) and 1968 (the “Hong Kong Flu”) took approximately 1 million lives each across the globe. The Swine Flu pandemic of 2009 took two-hundred thousand lives. As we reach the end of 2021, the world is still in the midst of the Covid-19 pandemic of 2020. As of November 2021, more than 5 million deaths have been recorded worldwide as a result of Covid-19.

So far, none have been as deadly as 1918. Today, we have more knowledge and understanding of viruses. Advancements in medicine and technology have helped to develop vaccines to prevent and limit such devastating outbreaks. As Covid-19 rages on and new strains appear, world leaders, scientists, and medical professionals are working hard to treat the virus. Likewise, they are pushing for everyone to get inoculated with the vaccine. As of November 2021, nearly 6.9 billion vaccine doses have been administered worldwide.