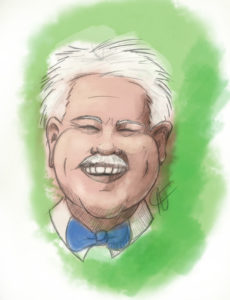 Watching a Rick Sebak show is like visiting your grandparents’ attic with your kindly, cool uncle. As he dusts off and opens the boxes and trunks, he gives you a little history, unearths some long-forgotten treasures, tells some great stories, and stumbles across some surprises.  And in the process, you also learn a bit about yourself.

Described by some as a national treasure, a visionary documentarian, or ”Mr. Pittsburgh,” Sebak has been entertaining, informing, and educating Pittsburghers and people across the nation for more than a quarter century with his unique way of presenting a subject for further investigation. Whatever you call him, Sebak is purely Pittsburgh. Born June 5, 1953, Sebak likes to note that was also the same day that the Squirrel Hill Tunnels opened. The Bethel Park native attended St. Valentine Grade School, Bethel Park High School, and the University of North Carolina at Chapel Hill. After graduation, he began working as a filmmaker for South Carolina Educational Television. Coincidentally, Pittsburgh television personality Josie Carey was also working there, and together they collaborated on a show called Wheee!

A trip to Australia to cover the Spoleto Arts Festival afforded him the opportunity to get a bit creative, and while there, he produced the Slightly Wacco Aussie Doco, his first attempt at capturing the essence of a culture on film. During his 11-year tenure at the station, Sebak also produced programs including the award-winning documentary called Shag, which focused on the South Carolina state dance.

How he came back to work in Pittsburgh is rather pedestrian. Sebak answered a want ad for a position at WQED that he found in a broadcasting industry magazine and was hired. When he arrived in 1987, he was assigned to complete a project the station was already working on about the city’s rivers mundanely called Three Rivers. Sebak took on the project, which aired in 1988, and renamed it The Mon, The Al and The O, imprinting the program with his hallmark folksy narrative style. Also in that year, he created the beloved Kennywood Memories, which was a nostalgic excursion into the charm and history of one of Pittsburgh’s amusement parks. To date, Sebak, who now resides in Regent Square, has produced nearly two dozen programs about Pittsburgh. In the process he originated the “scrapbook documentary” genre, which weaves old photos and films, home movies, postcards, and first-person interviews into a narrative.

Audiences fell in love with Sebak’s first programs. He followed them with a string of informative and quirky documentaries about the area, among them Holy Pittsburgh!, Things that Aren’t There Anymore, Flying Off the Bridge to Nowhere, and North Side Story.

His shows became so popular that it wasn’t very long before Sebak was taking his talent nationwide and making documentaries with a national appeal like Shore Things, A Ride Along the Lincoln Highway, and A Cemetery Special. But it’s his shows about the wonders and oddities around Western Pennsylvania that garner the most acclaim. In a program called What Makes Rick Tick? that aired in 2012 to commemorate his 25th year at WQED, Sebak said, “No one loves a national show like Pittsburgh loves a local show.”

In 2003 after the death of Fred Rogers, Sebak rewrote an earlier documentary on Rogers, making a new program with national appeal titled Fred Rogers: America’s Favorite Neighbor. This documentary resulted in Rick nomination for two Primetime Emmy Awards: one for Outstanding Writing for Nonfiction Programming, and the other for being one of the producers of an Outstanding Nonfiction Special.

In addition to whetting the appetites of Pittsburghers for nostalgia, hot dogs, ice cream, things no longer in existence, and pie, Sebak has also been a bit of a savior for WQED. In the early 1990s, WQED found itself in dire financial straits. However, when pledge breaks began offering premiums such as Sebak’s history DVDs, pledges went up. In addition, the station often gets a cut of the sales of the DVDs. Other PBS stations have taken notice of the success of Sebak’s scrapbook documentary style and have adopted it at their stations, producing their own programs about the idiosyncrasies of their cities. The Buhl Foundationsupports Sebak’s work; it’s the philanthropic foundation of Pittsburgh retailer Henry Buhl, Jr. and is charged with preserving the well-being of the citizens of the City of Pittsburgh and the County of Allegheny.

They say you’ve made it when you’re parodied on Saturday Night Live. In Pittsburgh, you know you’ve made it when the WDVE Morning Show skewers you during their “DVE Mario” segments, which poke fun at former Penguin and current franchise owner, Mario Lemieux. If that is the case, then Rick Sebak has certainly arrived. DVE Mario has revealed that Sydney Crosby loves Rick Sebak shows, especially the “Hot Dogs that Aren’t There Anymore” documentary. And the latest Pittsburgh sensation, Pittsburgh Dad, recently used footage from Sebak’s Kennywood Memories in its homage to the movie Back to the Future to celebrate arriving at the date in the movie that was 30 years into the future, October 21, 2015.

All kidding aside, Rick Sebak has helped put Pittsburgh on the map along with Bridges to Nowhere, Gus & Yia Yia’s ice balls, motels in the shape of ships perched on sides of mountains, and a host of other purely Pittsburgh subjects. His Happy Holidays is the most aired of all his programs and is even shown in  many markets around the country.

Sebak is often overwhelmed with suggestions from fans for new programs. One thing that is never suggested is that Sebak call it a day. In the WQED Special, Sebak said, “I didn’t start out to make history programs; I set out to make interesting programs. But I always think it’s interesting to know how things started.” Sebak started in Pittsburgh, and we are all the better for it.