Antonio Brown tweets that he wants to be traded from the Steelers, beginning a year a drama for the wide receiver. Penn State loses to Kentucky on New Year’s Day in the Citrus Bowl. On January 20, the area experienced a Super Wolf Blood moon. Twelve barges break loose on the Mon closing several bridges. The PA Turnpike raises tolls–again. 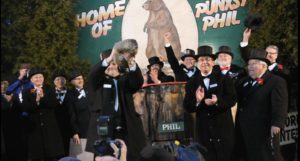 Punxsutawney Phil does not see his shadow at the 133rd Annual Groundhog Day Celebration. The Penguins play the Philadelphia Flyers at Lincoln Financial Field, as part of the Stadium Series, losing 4-3 in overtime. Pittsburgh Judah Samet, Holocaust survivor and Tree of Life shooting survivor, is President Trump’s guest at the State of the Union Address. The year 2018 was the wettest on record for Pittsburgh, but the new year is off to a soggy start as well with 5.15 inches of precipitation accumulating through mid-February, causing numerous landslides in the area. “Da Vinci the Exhibition” premiers at the Carnegie Science Center. 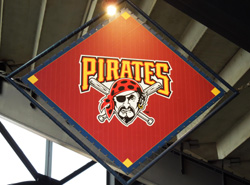 The Pirates open their season on April Fool’s Day, losing 6-5 in 11 innings. The Duquesne Incline gets stuck, trapping 40 passengers for two hours. The Penguins lose to the New York Rangers in the first round of the Stanley Cup playoffs.

Just Ducky Tours halts operations in Pittsburgh due to safety concerns after similar duck-boat tour sinks in Branson, Missouri. Century III Mall is shuttered except for J.C. Penney. Heath care providers UPMC & Highmark reach an agreement giving those with Highmark health insurance access to UPMC physicians for the next 10 years.

Picklesburg returns bigger than ever, packing Pittsburgh with pickle lovers. Amazon announces that it will build a 1,000,000 square foot facility in Findlay Township, which will bring 800 jobs to the area. Four alligators are sighted in the Pittsburgh area since May, with one being found at a Shaler Giant Eagle parking lot. Kennywood unveils its new roller coaster the Steel Curtain. Heavy rains pound the area causing flash floods and a sinkhole to open on McKnight Road.

The Three Rivers Regatta is unexpectedly cancelled when it is revealed that the management company failed to secure mandatory insurance for the event. President Trump visits the Shell ethane cracker plant.

Steelers quarterback Ben Roethlisberger injures his elbow and is out for the season. After nine seasons, the Pirates fire manager Clint Hurdle. The Rivers Casino opens its sportsbook BetRivers.

A massive sinkhole opens on Penn Avenue near 10th Street, swallowing a PAT bus and creating a national stir. Tree of Life congregation observes the one-year mark after the deadly shooting there. “Mummies of the World” exhibit opens at the Carnegie Science Center 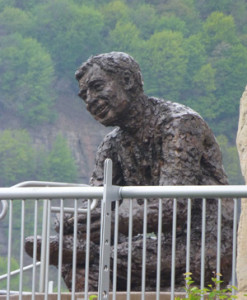 Newborns at Magee-Womens Hospital are dressed in cardigans to honor Mr. Rogers on Kindness Day. Sidney Crosby has surgery for a sports hernia and will be out until January 2020. Pittsburgh celebrates Light Up Night kicking off the holiday season. As if the Steelers-Browns rivalry didn’t have enough passion, a game-ending scuffle between Browns player Myles Garrett and Steelers QB Mason Rudolph, in which Garrett ripped off Rudolph’s helmet and hit Rudolph’s head with it, escalated the bad blood between the teams and lead to Garrett being suspended indefinitely, Rudolph being fined $50,000, and 33 players being fined by the league.

The B. E Taylor Christmas Show come to an end, three years after the singer’s death in 2016. The Model Railroad & Village at the Carnegie Science Center celebrates its 100th Anniversary. Pittsburgh turns the calendar, welcoming in 2020 with its First Night celebration.