The Talk of the Town: Pittsburghese

“Listen, yinz, ta this story.  Last Mundy, when I got home from dahntahn Picksburg, I redded up the hahse, worshed the clothes and did the arning, n’at.  Then I decided ta take a break coz I was gettin’ rilly hungry.  I looked ina fridge, but it needed stocked.  Alls I had was butterbread and leftover city chicken.  No jumbo, no chipped ham, no kolbassi.

So I headed aht to the store.  I got me a buggy and picked up a hoagie, some pop and a duzn eggs in case I wanted dippy ones in the mornin’.  When I got back home, I headed aht to set by the crick ta eat in peace and quiet.  Just as I was gonna take a bite a my sammich, my nebby neighbor, Shurl, shows up, wantin’ ta know how I been.  Whiles we’re chattin’, I see a grinny sneak up and start nibblin’ on my mill.  I tried ta chase him, but the grass was slippy, and I fell in ta the jaggerbushes.  I never been so flustrated.”

If you grew up in our home town, no further explanation is necessary.  In case you’re new to the “Burgh,” or planning a visit, here’s an insight into what that was all about: “Listen, all, to this story.  Last Monday, when I got home from being in downtown Pittsburgh, I cleaned the house, washed the clothes and did the ironing.  Then I decided to take a break because I was getting really hungry.  I looked into the refrigerator, but it need to be stocked.  All that I had was buttered bread and leftover city chicken (cubed beef or veal, skewered, breaded and fried).  I had no bologna, thinly sliced ham, no Polish sausage.

So I went to the store and got a cart.  I bought a submarine sandwich, soda and a dozen of eggs in case I wanted eggs over easy in the morning.  When I got back home, I headed out to sit by the creek to eat in peace and quiet.  Just as I was about to take a bite from my sandwich, my nosy neighbor, Cheryl, appeared and asked how I have been.  While we are talking, I saw a chipmunk and it started to nibble on my meal.  I tried to chase him, but the grass was slippery and I fell into the thorn bushes.  I’ve never been so frustrated.”

Pittsburghese: Influences From Many Cultures 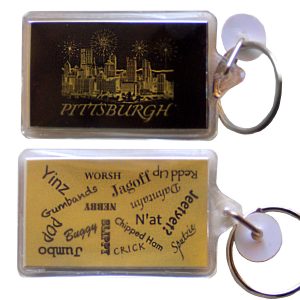 As you can see, Pittsburghers have a language all their own, with a distinct vocabulary, grammatical construction, and pronunciation.  Much of the way Pittsburghers talk is due to the people who settled here and built our great city over the centuries.  The area has seen wave after wave of immigrants, each leaving their mark on the local language.  The first people from Europe to live in southwestern Pennsylvania were Scots-Irish, and linguists believe that the peculiar “yinz,” the second personal plural pronoun, is derived from a Scots-Irish heritage.  It is the equivalent of the Southern “y’all” or the New Jersey “yous.”  Many people believe the terms nebby, slippy and redd-up came from the Pennsylvania Dutch, but researchers from the Pittsburgh Speech and Society Project attribute those words also to the Scots-Irish.

But the Germans, who were referred to as the Pennsylvania Dutch, did have a great influence on the language.  Many linguists attribute the habit of Pittsburghers to lowering the intonation at the end of a question that can be answered with a yes or no to the speech patterns of that group.

The influx of Eastern Europeans added to the vernacular and may have contributed to the way Pittsburghers pronounce their words.  Babushka (a headscarf), kolbassi (sausage), and gutchies (underwear), all are believed to have come from the Eastern Europeans.  It is supposed that with all the different ethnic groups trying to learn the language at the same time, the pronunciations may have morphed into non-standard sounds.  For instance, if a Slovakian immigrant was working with a Polish immigrant, and they were both trying to learn English, the result may have been the unusual way of pronouncing words that is evident still today. It is not difficult to speak like a native Pittsburgher; it takes little effort.  Unlike Eliza Doolittle, Pittsburghers don’t place much emphasis on diction.  You won’t hear the precise sounds of “how now brown cow” from the lips of someone fluent in Pittsburghese.  It would sound more like “hah nah brahn cah”.  Instead of rounding the mouth to form vowel sounds, natives tend to keep their lips at rest and form the vowels sound from the back of the mouth.

Grammatically, Pittsburghers ignore the need to include “to be” with words like “need” or “want”.  For instance, it is quite common to hear a phrase such as “The grass needs mowing” instead of the grammatically correct “The grass needs to be mowed.”  This form of sentence construction is also believed to have been inherited from the Scots-Irish.

Pittsburgh area residents also have a curious habit of tacking “n’at” at the end of their sentences.  Translated, it means “and that” and really has no meaning beyond a kind of et cetera.  Pittsburghers proud of their heritage can be seen sporting bumper stickers that say N@, a referral to the “n’at” ending.  While some are quite proud of the way they speak, others who consider Pittsburghese a lower form of speech often refer to die hard native speakers as “yinzers,” much the same way as those who speak the King’s English look down on others who speak with a cockney accent.

Of course, no matter your feelings toward the peculiarities of native Pittsburghese, it’s always the talk of the town!


We’re proud of our Pittsburghese dialect. Learn more about it from Barbara Johnstone, Professor of Rhetoric and Linguistics in Carnegie Mellon University’s Department of English. She traces the history of the dialect, talk about how it is changing and how people across the country are keeping it alive. 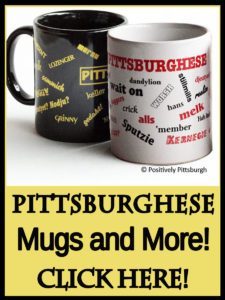