Where to Sled Ride Around Pittsburgh

Pittsburgh is a city like no other for many reasons; one of which is our terrain. Our hilly—and in some cases mountainous—peaks as well as our numerous creeks, streams, and three rivers have shaped our landscape and our culture. Our geography has resulted in more bridges than Venice, Italy; inclines to shuttle people up and down hillsides; a system of color-coded beltways for navigating our sometimes maze-like streets; and tunnels for transporting us through what would otherwise be impassable mountains. We also have a unique network city steps. 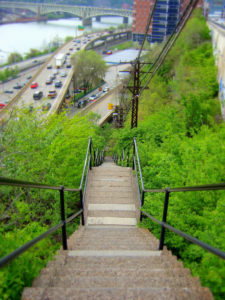 Pittsburgh grew from the settlements at Fort Duquesne and Fort Pitt at the confluence of our three rivers known as The Point. As the population grew and the city expanded, residents headed for the hills surrounding the city. As a result, workers now needed a means of transportation to get to their jobs. The least costly means of transportation has always been good old foot power. However, with our hills, those who needed to walk to work didn’t have many practical options. To address that need, in the late 19th and early 20th centuries, the city began to build staircases all over the hillsides in the area.

Originally, they were built from wood and then later, concrete. Eventually, there were so many staircases that famed journalist Ernie Pyle described Pittsburgh in 1937 as looking as if:

“…it was laid out by a mountain goat. And then the steps. Oh Lord, the steps! I was told they actually had a Department of Steps in the city government. That isn’t exactly true although they do have an Inspector of Steps. But there are nearly 15 miles of city-owned steps in Pittsburgh, going up the mountainsides. The well-to-do people drive to work. The medium people go on street cars, ‘inclines’, that’s what they call those cable cars. And the poor people walk up the steps.”

The network of city steps scaling our hillsides became the primary way Pittsburghers commuted to work. They also served the community socially. In years past, kids played on the steps, friends met there, and teens often hung out on them. Sadly, today some of the steps have become places where some less-than-desirable things occur.  City of Pittsburgh police receive special training on how to navigate the steps while patrolling to keep them safe.

The miles of staircases in the city are overseen by the Department of City Planning. It is believed that 66 of the city’s 88 neighborhoods have city steps. According to the city’s website, there are more than 700 staircases. Bob Regan, author of The Steps of Pittsburgh: Portrait of a City, contended that that there were 712 sets of city staircases. He goes further to say that he counted 44,645 individual city steps—which amounts to an elevation of 24,108 vertical feet—in 1999.

However, in a 2014 Wall Street Journal article, the city’s the former chief operations officer, Guy Costa, estimates that the city now has only 675 public staircases due to disrepair and deterioration. Unfortunately, repairing these city steps is rather costly given site access for the equipment. While he knows they are a city attraction and offer magnificent views of the city, he says other city expenses are more vital.

More and more walkability is becoming a factor for people when considering where to purchase a home. City steps play an important role in maintaining that walkability for many neighborhoods in Pittsburgh. One such neighborhood enjoying a resurgence is the South Side Slopes. This area of the city also boasts the greatest concentration of city steps—more than any other neighborhood in the city. Preserving Pittsburgh’s network of city steps is crucial to maintaining walkability, and the residents of the South Side Slopes know that full well.

Some of the city’s stairs run along the street, while others are staircases built down steep hill sides or built on piers elevated from the ground. Sometimes the steps get up close and personal, passing through backyards and mere feet away from homes. Some streets in Pittsburgh are actually staircases. Three hundred of the city’s steps are classified as streets on paper; however, they can only be traversed on foot.

The city has an interactive map of all its staircases on its website for those who’d like to explore them further. Below, is an extensive list of some climbs we suggest you check out.

Additionally, the city is enlisting help for assessing the status of those staircases. If you’d like to help preserve the city steps, visit the city’s website to  find out how you can volunteer to help survey the condition of the steps. Learn more at: http://pittsburghpa.gov/dcp/steps.

At more than 375 steps, making it one of the longest city steps, the Ray Avenue steps traverse backyards in Brookline: beginning at the bottom of W. Liberty Avenue and rising to Pioneer Avenue.

Rising Main is one long, steep climb—between 330 and 375 steps—from Howard Street up to Warren Street in Fineview.

At approximately 333 steps, the Oakley Street steps will take you from Josephine Street to Sumner Street in the South Side Slopes. These steps have been recently adorned with a colorful mosaic.

Canton Avenue may not be as long as a trek as the others, but it is definitely the steepest. With a 37% grade, it is officially recorded as the steepest public street in the country.

Anna J. Cawrse, a Harvard graduate student who studied our city, pinpointed the five oldest sets of steps in Pittsburgh. Junilla Street was built in 1911 and connects Centre Avenue and Elba Street in the Hill District. The Armstrong Street Steps, built in 1919, connect Second Avenue with the Bluff at Duquesne University. The set of steps connecting Eckert and Knapps Streets on the North Side were built in 1923 and can be found on California Avenue. Both the Oakley Way steps, and the Murray Avenue Steps, were built in 1928. The former can be found in the South Side between Josephine Street and Mission Street. The later sits between Beechwood Boulevard and Murray Avenue in Squirrel Hill.

Climbing these staircases can be quite a hike; maybe that’s why so many of them are named for saints. Maybe Divine intervention is called for in gathering the strength to finish them.

The Ladies Have It

Take a look at our video about the City Steps.