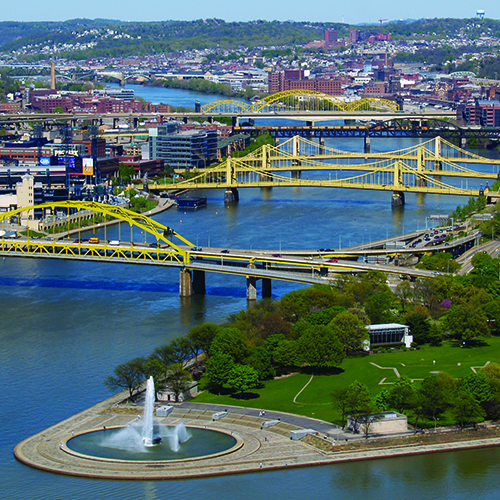 Point State Park is the heart of Pittsburgh. Not only is it where the three rivers meet, but it is also where our city’s history meets with the Pittsburgh of today.

William Trent established the area we know as Pittsburgh and the Point in the 1740s. As a fur trader, Trent set up a trading post on the land. In 1753, a young George Washington—a lieutenant colonel in the Virginia militia—traveled this way. He wrote in his journal a description of the land.

“As I got down before the Canoe, I spent some Time in viewing the Rivers, and the Land in the Fork; which I think extremely well situated for a Fort, as it has the absolute Command of both Rivers. The Land at the Point is 20 or 25 Feet above the common Surface of the Water; and a considerable Bottom of flat, well-timbered Land all around it, very convenient for Building: The Rivers are each a Quarter of a Mile, or more, across, and run here very near at right Angles: Aligany bearing N. E. and Monongahela S. E. The former of these two is a very rapid and swift running Water; the other deep and still, without any perceptible fall.”

By 1754, Washington’s prediction came true. The Virginians began construction of Fort Prince George on the land.

Battling for the Point

Soon after occupying the area, Native Americans and French soldiers ambushed incomplete stronghold. The French took control and declared the stronghold Fort Duquesne. General George Braddock attempted—and failed—to reclaim the land for the British in 1755. Three years later, General John Forbes successfully marched on Fort Duquesne. Upon learning about the impending attack, the French burned down the fort and fled before Forbes could strike. With British control over the area restored, construction of a permanent outpost, Fort Pitt, began in 1759. Although the fort came under attack during Pontiac’s Rebellion in 1763, the fort remained in British hands for the next decade and a half.

As the Revolution ensued the Continental Army claimed Fort Pitt as the western headquarters. It became the location of the signing of the first peace treaty between Native Americans and the fledgling United States in 1778. However, after thirty years of use the fort was deteriorating. All inhabitants abandoned the fort by 1792, leaving only the Blockhouse in tact.

Nothing of note happened at “the land at the point” until the time of the Great Depression and World Wars. As the city grew and changed, the area became an industrial hub. By the 1930s, warehouses and railroad yards took up space and disrupted the views from Mt. Washington. The land was not valued as it once was, or is now. After World War II, civic leaders resolved to change that.

Efforts to clean up the land started in 1945. Architects drew up plans and initiated the long process of acquiring the land at the point. Structures were demolished, bridges were rerouted, and retaining walls were constructed. Finally, a tree-lined great lawn was the outcome. Three traceries, one of Fort Duquesne, one of Fort Pitt, and the original confluence of the point, were marked in the lawn. Point State Park was completed in 1974 with the addition of the Fort Pitt Museum. And of course, the pièce de résistance is the 150-foot fountain that pumps water into the sky. The park and The Blockhouse were designated as a U.S. National Historic Landmark in 1975.

Turn of the Century

The Point is just as iconic today. As Pittsburghers, we claim bridges, inclines, and the Point as our quintessential landmarks. The park was renovated in 2006, in preparation for Pittsburgh’s 250th anniversary (in 2008). The fountain was then refurbished and rededicated in 2013. Over the years Point State Park has been host to festivals, concerts, and celebrations. Ever since the park opened, this green space has been the central place where Pittsburghers come together. The Point has for centuries and still remains the heart of Pittsburgh.