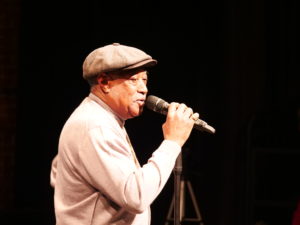 “How do you get to Carnegie Hall?” The corny answer to this old joke was always, “Practice, Practice, Practice.” This rings true for the legendary Pittsburgh drummer, Roger Humphries. But being born into a musical family doesn’t hurt either.

Humphries was born on January 30, 1944, the youngest of 10 children and was raised on Pittsburgh’s North Side. His uncles Frank and Hildred Humphries were musicians as were his older brothers, Lawrence and Norman, who were an enormous influence on the young boy. As if by osmosis, Humphries, by the age of 3 1/2, was adept at playing the drums. A child prodigy, he was so astonishingly gifted, that legendary Pittsburgh Courier photographer Teenie Harris captured an image of him when he was four behind a drum kit at Mary J. Cowley Elementary school, even though he was too young to enter school.

He never took lessons but learned by listening. When he was 12, his uncles introduced him to another legendary Pittsburgh drummer Art Blakely. Blakely put him on stage and Humphries became a regular performer in Hill District jazz clubs, turning profession by the of 14.

Humphries attended Allegheny High School. At the age of 16, he achieved the distinction of leading a quartet at the proverbial Carnegie Hall. After touring for a year with Stanley Turrentine, in 1964 he joined an ensemble headed by Horace Silver, a pianist and composer, and toured Europe and the United States from 1964-1967 until Mr. Silver took ill.

When he came back to Pittsburgh, he married his high school sweetheart, Regina. As he was doing a stint as construction worker, he was given the opportunity of a lifetime. He was invited to audition for Ray Charles. They put sheet music in front of Humphries, and he had to tell him that he couldn’t read music. Nevertheless, when Charles began playing, Humphries joined in and impressed the great performer and won the position. With Ray Charles’ Big Band, he toured Europe and the U.S., among their gigs was playing at the Newport Jazz Festival.

A Pittsburgher at heart, Humphries left Ray Charles after a year to return home when his farther suffered a heart attack and to raise his four children. After that he played local clubs and formed his own group the R.H. Factor, which has become a fixture on the Pittsburgh jazz scene.

A kind, humble artist, he also became a teacher in 1980 at the Pittsburgh Creative and Performing Arts School (CAPA) until retiring in 2010. He also taught music at the University of Pittsburgh, Duquesne University, and Slippery Rock University Summer Jazz workshop as well as and at Mellon Jazz Masters Classes.

In 2019, he was honored with an honorary degree of Doctor of Humane Letters during West Virginia Wesleyan College’s Commencement.