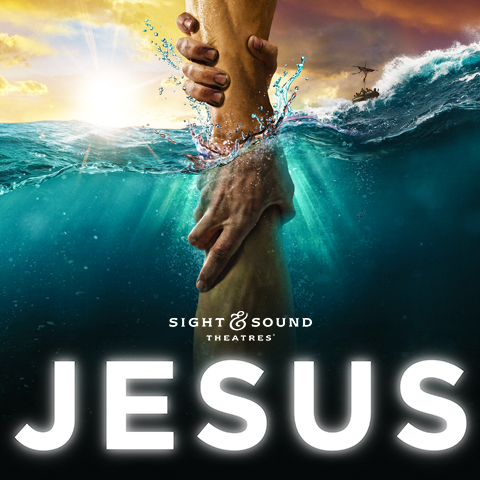 It’s hard to dazzle these days with technology like virtual reality, self-driving cars, and artificial intelligence becoming commonplace, but the Sight & Sound Theatre in Lancaster, Pennsylvania, does just that. I recently had the pleasure of attending a performance of their production Jesus, and it not only lived up to the glowing reviews I’d heard from others who had been there and seen it, but it also surpassed those expectations.

The Sight & Sound Theatre brings Bible stories to life on its 300-foot panoramic stage that surrounds the audience on three sides of its 2,000-seat auditorium and captivates with state-of-the-art technology, gifted performers, and live animals.

There is another Sight & Sound Theatre in Branson, Missouri, but it also had its roots in the verdant, rolling farmlands of Lancaster, Pennsylvania, where Glenn Eshelman grew up on a dairy farm. The beauty surrounding him inspired him to paint landscapes as a boy and then channel his creativity into photography. After marrying his wife, Shirley, and struggling as an artist, in 1964 he began to give slide show presentations of his work, complete with musical underscore and narration to appreciative audiences. It was during this time that the rudimentary Sight & Sound Theatre was born.

By the mid-1970s, he and Shirley were giving their multimedia presentation all over the country, and in 1976 the Living Waters Theatre opened in Lancaster to house the production. In 1987 the theatre’s first full-length Biblical production, Behold the Lamb, opened. The show’s popularity brought along with it the realization that a larger venue was needed. In 1991, the Entertainment Centre opened.

Tragically, in 1997, that theatre caught fire, but the Eshelmans would not be deterred, and 18 months later, the present theatre opened, performing Noah. With animals surrounding the theatre on three sides, audience members felt as if they were living inside the Ark. In 2008, the Branson location was added. Today, the Sight & Sound Theatre, a family-owned business, employs more than 600 people and more than 1 million people come to watch these epic Bible stories annually.

From the ease of parking to the clean, themed interior of the theatre, the only other place I’ve experienced such a seamless production has been in Disney World. The theatre is set in that same rolling farmland that inspired Glenn Eshelman more than 50 years ago, and parking was free and well-directed. The exterior of the enormous theatre looks somewhat like a Middle Eastern palace or the Taj Mahal. From a casual survey of the license plates I passed on our way into the theatre, word has gotten out about the production as I saw cars from Ontario, New York, Illinois, North Carolina, and Ohio in the lot. There were also numerous tour busses from around the country as well.

In front of the entrance is a beautiful Lion and Lamb sculpture with a water fountain that makes for a great picture spot. We had excellent seats on the center aisle in the fourth row from the stage. As I’d seen numerous depictions of the life of Jesus including The Passion of the Christ, Jesus Christ Superstar, and Godspell, I was a bit skeptical that this production could bring anything new to “the greatest story ever told,” but I was pleasantly surprised that it did.

The narrative gave the well-known figures of the Gospel personalities and life and humor, especially when Mary, the Mother of Jesus, and Mary Magdalene were introduced to Mary of Bethany and one of the characters quipped something to the effect of, “Is everybody here named Mary?” Those who sang had strong, clear voices and unlike some stage productions I’ve attended, I could understand every lyric that was sung. And the emotion was palpable—the anger in the Temple when Jesus threw out the moneychangers, the sorrow at the Crucifixion, and the jubilation at the Resurrection–all drove home the story’s impact.

With all the technology, going in I thought maybe that it would get in the way of the tale, but it did not. It only enhanced it. The panoramic back drop with scenes of Israel gave you a “you-are-there” kind of feeling, and the movable set pieces, special effects, and accompanying sounds brought everything to life. I mean, when was the last time a Roman Centurion on a white stallion galloped past your seat in a theatre?

At nearly two hours, the production flew by, and just when you thought they couldn’t dazzle you again, the crew pulled another trick out of their sight and sound bag. So much so that it was fun to hear the reaction of the audience with some shouting Amen or clapping for Jesus after performing a miracle.

Departure from the theatre was just as smooth as arrival, and everyone from the bathroom attendants to concession workers to ushers were polite and cheerful as befitting a theatre whose mission is to provide an “epic experience with a meaningful message.”

Jesus runs until October 5, 2019, and then the theatre prepares for their Miracle of Christmas spectacular. Premiering in 2020 will be a new production, Queen Esther. Tickets can be purchased online and vary in price.

It’s only a three-hour drive from Pittsburgh by the overpriced Turnpike, and I hope to return. While I’m there, I’d like to enjoy more of the beauty of Lancaster that inspired Glenn Eshelman and the surrounding area and all the other activities and sights there.