The History Behind the Holiday: Rosh Hashanah

What marks a new year? Across most of the Western world, parties leading up to midnight of January 1st celebrate a new calendar year. Often, the first day of school in September marks a new year. In the business world, fiscal years can begin and end at any time. For the Jewish people, Rosh Hashanah is the two-day religious festival that honors the Jewish New Year.

In Hebrew, “Rosh Hashanah” translates to “head of the year.” However, the holiday is celebrated on the first day of Tishrei, the seventh month of the Jewish calendar. The Jewish calendar is lunisolar—based on both the moon’s phases and the time of the solar year. On the Gregorian calendar, the celebration often falls in September. The earliest date that Rosh Hashanah can be celebrated on the Gregorian calendar is September 5 and the latest is October 5.

Still, you might be wondering, “why is the New Year celebrated in the seventh month?” It is the traditional anniversary of the day God created Adam and Eve, and thus the creation of the world.

Rosh Hashanah begins the 10 “Days of Awe.” This is a time for reflection. It is believed that on the first of the High Holy Days, God considers the year’s deeds of each person and decides what the next year will look like for them. The 10 days conclude with the Day of Atonement, Yom Kippur—the holiest day of the Jewish year.

Rosh Hashanah is rooted in the Old Testament. It was established by God in the book of Leviticus 23: 23-25, and is referred to as the Day of Trumpets:

And the LORD spoke to Moses, saying, “Speak to the people of Israel, saying, In the seventh month, on the first day of the month, you shall observe a day of solemn rest, a memorial proclaimed with blast of trumpets, a holy convocation. You shall not do any ordinary work, and you shall present a food offering to the LORD.”

It is likewise cited in the book of Numbers 29:1: On the first day of the seventh month, you shall have a holy convocation. You shall not do any ordinary work. It is a day for you to blow the trumpets.”

Rosh Hashanah is celebrated with prayer services, a candle lighting, and the sharing of food. Just as work is not permitted on the Sabbath, it is likewise avoided on this high holiday. Thus, much of the time is spent in synagogue. As prescribed in the Torah, the “blast of trumpets” is sounded. Hearing the shofar (a ram’s horn) in synagogue is a mitzvah–a Divine commandment from God. It is not uncommon to hear the horn 100 times each day of Rosh Hashanah.

In the evening, candles are lit and a feast is had. Symbolic foods are bountiful. Challah, a round loaf of bread, signifies the seasons and cycle of life. Partaking in honey cakes or apple slices dipped in 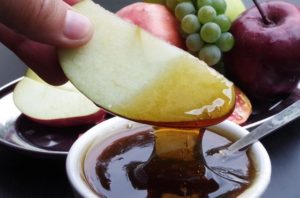 honey is a tradition to symbolize a sweet and fruitful new year. Pomegranates also hold meaning to the Jewish holiday. It is said that there are 613 seeds in each pomegranate, representing the 613 mitzvot, or commandments derived from the bible.

In addition to attending services at the synagogue and celebrating with a festive meal at home, it is customary to “cast your bread upon the water”. Tashlich (“casting off”) is a ceremony performed in the afternoon of the first day of Rosh Hashanah. Jews head to a body of water and throw breadcrumbs upon it, symbolically casting away their sins.

And, of course, Shana Tova (“a good year”) is shouted when wishing someone a happy new year.

Shana tova to all who celebrate!