Pittsburgh is the 61st largest city—by population—in the country. By 2015 data, Pittsburgh has a population of approximately 305,000 over 55.5 square miles. When Pittsburgh was incorporated as a borough in 1794 it amassed only a half square mile. The City of Pittsburgh has been absorbing municipalities for centuries. However, unlike other cities—such as Houston, Phoenix, and San Diego—city limits have stayed virtually unchanged since the 1920s.

It’s estimated that if Pittsburgh were to grow its area to the same size as some of the top 10 cities, the population would grow to over one million. That would make Pittsburgh the 9th most populous city in the country. Alas, that is not likely to happen any time soon. However, there are presently talks of adding the neighboring Borough of Wilkinsburg to the city. 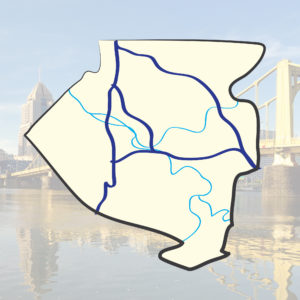 Allegheny County, like Pittsburgh, is the second largest in the state—after Philadelphia (city and county). It was established in 1788 from Westmoreland County and Washington County. Pittsburgh was appointed as the county seat amongst the seven townships that made up Allegheny County at the time. Aside from Pitt Township, there was also Elizabeth, Mifflin, Moon, Plum, St. Clair, and Versailles. It wasn’t until 1816 that Pittsburgh officially became a city.

As time went on, those seven original townships broke up into smaller municipalities. The City of Pittsburgh acquired many of those municipalities throughout the next century or so.

Pittsburgh growth developed momentum in the mid- to late 1800s. Parts of Pitt Township had been incorporated into the city limits in 1846. A little more than two decades later, in 1868, the remainder of Pitt Township—and five other municipalities—followed suit. From then on, additions to the City of Pittsburgh were made nearly every decade until the 1950s. See a full list of Pittsburgh annexations by decade below.

Pittsburgh’s land acquisition built up momentum in the early 1900s. The year of 1907 was monumental for the city in that respect; Pittsburgh acquired the City of Allegheny (North Side), as well as the Montooth and Sheraden Boros. By 1930, growth of the city had slowed. Only the remainder of previously annexed areas joined over the next three decades. The last to join were parts of Baldwin and Robinson Townships in 1955.

Will Wilkinsburg be Next?

A 1907 Supreme Court of Pennsylvania ruling allows for a municipality to petition the Court of Common Pleas to merge with a neighboring community. Wilkinsburg, a borough just east of the city, is 2.25 square miles with approximately 15,000 residents. This possible absorption would be the most significant annexation since Allegheny City in 1907.

Wilkinsburg residents have been working to obtain signatures from 5% of their registered voters in order to petition the court. As of July 2021, the process has been put on hold. Should the petition move forward, Pittsburgh City Counsel would need to vote to approve the petition. If successful, a referendum will appear on the November general election ballot; Wilkinsburg residents will vote to join the city. However, there is opposition coming from all sides. The residents in favor of the merge largely cite their high property taxes as motivation; Wilkinsburg pays more than double that city residents in property tax. Many who oppose the issue have concerns about the city’s budget and school district, as well as the possibility of gentrification to the area. Currently, the borough council and the Wilkinsburg Community Development Corporation are running a public information campaign and holding community discussions.

Will the City of Pittsburgh be growing once again? It’s unclear for now.