The History of the Allegheny County Courthouse & Jail 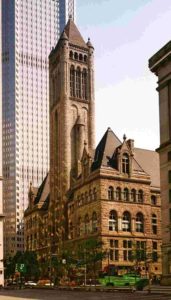 One of the most interesting things about visiting Europe is seeing the fortress cities, towns enclosed inside walls. Pittsburgh doesn’t have that, but the closest we would come to it is the Allegheny County Courthouse and Jail complex in downtown Pittsburgh.

The buildings on Grant Street are now dwarfed by the skyscrapers that have risen around them. However, back in 1888 when they debuted with their impressive tower and walled exterior sitting atop Grant’s Hill, the courthouse complex must have looked a bit like a fortified city.

The impressive, distinctive buildings were designed by noted American architect Henry Hobson Richardson, who had previously designed the Emmanuel Episcopal Church at 957 W. North Avenue, on the North Side in 1886. Along with Louis Sullivan and Frank Lloyd Wright, Richardson is regarded as one of the three most esteemed architects in the country, and his style was known as Richardsonian Romanesque.

Richardson’s buildings were the city’s third iteration of a courthouse in Pittsburgh. The first courthouse opened and began hearing cases in 1794 and was a wooden structure located in Market Square. The second was located on Grant’s Hill at the corner of Forbes Avenue and Grant Street and opened in 1841. From all accounts, this Greek Revival building was quite impressive, constructed from gray sandstone quarried from nearby Coal Hill (now Mt. Washington) with columns and a domed cupola. The building after several decades began to corrode in the city’s coal smokey air. In 1882, a fire finished the building off, and it was razed and plans for a new courthouse were made.

According to the Allegheny County website, “Richardson’s design was chosen because of its clarity of design and organization. He said he designed the buildings, ‘to express in the exterior the character and purpose of the interior, and to rely for architectural effect upon the arrangement of the messes, and the dignity and solidity of the construction.’”

Construction for the present courthouse and jail began in 1883, and five years later, the courthouse was completed. The granite edifice featured arched windows and entranceways, a 229-foot tower and an open-air courtyard. The interior boasted an impressive marble staircase and graceful arches as well as frescoes on walls and ceilings. 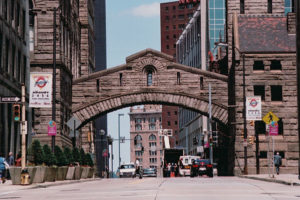 The neighboring jail was finished in 1886. Unfortunately, Richardson never saw his vision come to fruition as he died earlier in that same year. The jail’s most remarkable feature is its “Bridge of Sighs,” the enclosed walkway that spans Ross Street and connects the courthouse to the jail. It is modeled after the bridge in Venice constructed in 1600 and known as the Ponte dei Sospiri (Bridge of Sighs) as both the Pittsburgh and Venice bridges feature small windows where it was said that criminals sighed while looking out the windows at their last glimpse of freedom as they walked to the jail from the courthouse.

Pittsburgh’s Bridge of Sighs features in one of the city’s most scandalous stories—that of Mrs. Soffel and the Biddle Brothers. Kate Soffel was the wife of the warden, and they had living quarters in the Allegheny County Court House located on one side of the bridge; the jail was on the other. She often tried to visit the prisoners out of charity but fell in love with one of the Biddle Brothers. The Biddle Brothers were incarcerated for murder, and Mrs. Soffel helped them to escape. This was portrayed in the 1984 movie Mrs. Soffel, which starred Diane Keaton and Mel Gibson.

The Allegheny County Courthouse and Jail were also featured in the movies Striking Distance and Hoffa as well as Boys on the Side and Fences.

After serving for 109 years as a correctional facility, the jail closed in 1995 when the newer, more modern jail opened on Second Avenue.

In1976, the Courthouse and Jail buildings were designated a National Historic Landmark.