The Iconic Cathedral of Learning 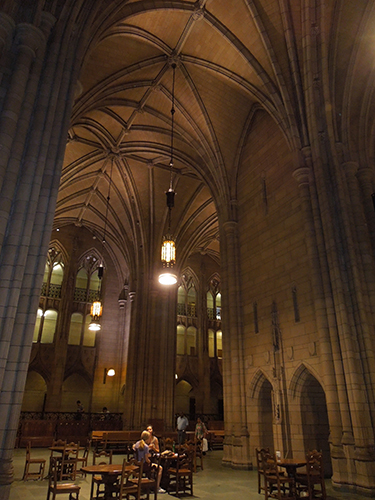 Whether University of Pittsburgh Chancellor John G. Bowman knew in 1921 when he commissioned the Cathedral of Learning to be built that it would become the symbol of the university, we don’t know. What we do know is that the cathedral is a remarkable educational edifice like no other in the country. At 535-feet tall with 40 stories, it is the tallest educational building in the Western Hemisphere, only surpassed in height by the University of Moscow’s main building.

Initially, Bowman envisioned a 52-story tower that would inspire the children of Pittsburgh to seek higher education (pun intended!). The proposed cost of the building was estimated to be between $10-$15 million, quite a sum in those days. To finance the construction, a “Buy a Brick” campaign was launched in 1925, and it encouraged school children in the area to give 10 cents to Pitt. In return, they would receive a certificate stating that they owned a part of the cathedral. It is estimated that 97,000 certificates were issued to children back then. It is believed the building acquired its name after Chancellor Bowman referred to the proposed new structure as a “cathedral of learning.”

Ground was broken for the tower in 1926, but after the stock market crash of 1929, the building was capped at 40 stories.  It was designed by architect Charles Zeller Klauder and constructed from Indiana limestone in the Gothic Revival style. The first class was held in the cathedral in 1931, and the cathedral was officially dedicated in 1937.

There are 2,000 rooms in the cathedral. On the ground floor is the four-story Commons Room. With its high arches, it looks like it came straight out of a Harry Potter novel. The room was a gift from Andrew Mellon. The cathedral also houses scores of classrooms, academic and administrative offices, libraries, computer labs, a theater, a print shop and a food court. Perhaps the crown jewel of the cathedral is its Nationality Rooms. There are nearly three dozen working classrooms, each of which were designed to represent the culture of various ethnic groups. They are located on the first and thirds floors of the cathedral.

Also of note in the cathedral are the Frick Auditorium and the University Honors College as well as the Croghan-Schenley Ballroom, which is straight out of Pittsburgh’s history. Essentially, it is two adjoining rooms—the ballroom and the Oval Room— which are connected by a hidden passageway in the ballroom’s fireplace. The rooms were brought to the cathedral in 1955 by William S. Miller, then president of Steelwood Corp., who had purchased the Croghan mansion in Stanton Heights.

William Croghan built the house in 1830 and it was his daughter, Mary, who eloped in 1842 as a teen with English captain Edward Schenley, causing a scandal and a rift in the family. After Croghan died in 1850, the mansion was run by caretakers as Mary Schenley spent most of her time in Europe. Miller bought the mansion and had these rooms dismantled and rebuilt in the cathedral. Mary Schenley, before she died, gave much of her holdings and property to the city of Pittsburgh. Coincidentally, the cathedral sits on what was once Schenley farms. Some claim that the cathedral is haunted and believe that it is the ghost of Mary Schenley who is responsible for the eerie doings there.

The Cathedral of Learning was designated a National Landmark in 1975 by the National Park Service. It is also listed on the National Register of Historic Places. Peregrine falcons have been known to make their nest atop the cathedral, and when Pitt wins a football game, the top of the cathedral is illuminated with yellow lights. Most importantly, it has become the symbol of the University of Pittsburgh.