The Kelly Strayhorn Theater: A Place of Inspiration and Artistic Incubation

The Kelly Strayhorn Theater in East Liberty is named for two hometown legends: Gene Kelly and Billy Strayhorn. Gene Kelly—singer, dancer, actor, filmmaker, and choreographer—is best known for his role in Singin’ in the Rain (1952) and many other films. Billy Strayhorn was an American jazz composer, pianist, lyricist, and arranger who collaborated with the likes of Duke Ellington. Both called Pittsburgh home during their childhoods. Just like these entertainment stars, the Kelly Strayhorn Theater also boasts an illustrious past—and projects an even brighter future.

The Kelly Strayhorn Theater (KST) originally opened in 1914 as the Regent Theater. At the time, the Regent was a state-of-the-art 1,000-seat venue. It showed silent films and housed a grand theater organ which provided dramatic accompaniment to the films on screen. Unfortunately, as time moved on, so did the popularity of silent films. The changing entertainment industry brought about long stretches of time in which the theater was dark, before eventually closing its doors in the 1950s.

In 1965, Associated Theaters, a managing group of several Pittsburgh theaters, sponsored a $175,000 renovation of the Regent. The Regent reopened in July of that year as an 850-seat theater for feature films. Unfortunately, the doors closed again in 1979 as the area went into a downturn with the collapse of the Pittsburgh steel industry. After a second round of renovations, the theater served as a concert space from 1995 to 1997. However, the theater closed once more.

Today, the Pittsburgh downtown cultural district is a 14-block area featuring theaters, art galleries, restaurants, and retail shops. Managed by the Pittsburgh Cultural Trust since 1984, this area is the brainchild of H. J. Heinz II. By 1995, the Stanley and Fulton theaters had been refurbished and renamed as the Benedum Center and the Byham Theater, respectively. As the cultural district continued to flourish, the arts community was looking for another mid-sized venue to welcome small arts groups and community programs. Thoughts turned to the ever-changing Regent Theater.

Once again, the Regent was reborn, but this time with a new name. The Kelly Strayhorn Theater opened its doors in 2001, as two facilities: the theater and KST Alloy Studios. These facilities honor their namesakes by fostering bold and innovative artistry. Today, the theater serves as an intimate, 350-seat performance space. Events, receptions, and pre- and post- show conversations are often hosted in the lobby. The Alloy Studios is equipped with two professional dance and performance studios for creation, education, and on-going partnership programs.

Persevering through the Covid-19 Pandemic 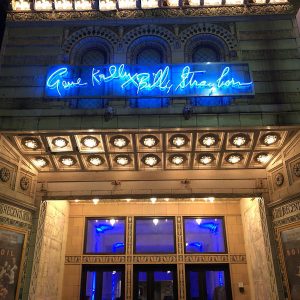 The COVID pandemic presented challenges for everyone including the arts community. Kelsy Black, KST’s marketing manager, spoke to some of the challenges they faced and the success they earned overcoming them.

“During the During the pandemic, KST transitioned to virtual programming and hosted many online events or conversations, including launching the successful virtual fundraiser Hotline Ring. We definitely learned a lot in the process of transitioning from in-person events to virtual, but we were able to meet those challenges.”

Those efforts brought the theater through to Fall 2021, at which point KST began to welcome back in-person performances. Black explains, “to ensure a comfortable retur to in-person programming for our audience, artists and staff at the KST have adopted numerous safety measures for all upcoming KST Presents performances.”

The KST continues looking forward to the future. “Taking inspiration from the cultural tradition of Black homemaking, KST is affirming itself as a home for artists and a site of resistance, birthing community-centered arts where all are valued, with particular care and nurturance for historically resilient folks,” said Black.

Historically as resilient as the Regent Theater, the East End neighborhood has embraced the theater in its newest life. And the Kelly Strayhorn Theater does not take their support for granted. Black affirms this when explaining the importance of accessibility to the organization.

“We know that being in the heart of East Liberty is a special privilege, and likewise we have tried to make our community first and foremost. Accessibility is a huge part of our ticketing structure, as we implement ‘Pay What Makes You Happy!’ allowing patrons to pay for the ticket at whatever price they are comfortable with. We are excited about our new fall season and the community seems excited to return!”

Black goes on to say, “The theater has been a part of the landscape of the East End for over 100 years and is now one of the only remaining historic theaters left. We hope to continue to be a safe haven and place of inspiration and artist incubation in the East End for years to come.”

The KST is a non-profit, funded by grants and donations from the community. People can support KST by coming to performances and by donating to KST to support their mission.