The Pittsburgh Marathon: Competitors Have the Run of the Place 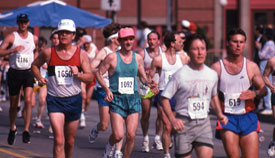 Pittsburgh hosted its first Dick’s Sporting Good Marathon on May 5th, 1985. The streets were closed to traffic as music filled the air. People lined the streets to cheer on the racers that went by. In addition to the marathon, there is a half marathon, a team relay, a kids’ race and 5K. Elite and seeded runners, wheelchair racers, and walkers take to the street each May.

The Dick’s Sporting Goods Pittsburgh Marathon course is certified by USA Track and Field. The purpose of such a certification program is to produce racecourses of accurately measured distances. The USATF explains, “for any road running performance to be accepted as a record or be nationally ranked, it must be run on a USATF-certified course”.

The race attracts athletes from all over the globe. John Kagwe, from Kenya, holds the men’s course record. He set the record in 1995 with a staggering 2 hours, 10 minutes and 24 second time. American, Margaret Groos set the course record for women in 1988. She ran the course at the incredible time of 2 hours, 29 minutes and 50 seconds. In 1994 and then again in 2000, Pittsburgh resident Tammy Slusser won the women’s title.

The Pittsburgh Marathon ran consecutively until 2003. During those years, UPMC was the largest sponsor. Unfortunately, when the city experienced financial distress UPMC pulled out. Mayor Tom Murphy concluded that the city couldn’t handle the financial burden of hosting the marathon that year, so he canceled it.

Thankfully, after a five-year hiatus, Dick’s Sporting Goods revived the marathon in 2009. It came roaring back, attracting 9,000 runners. Participation has increased with each succeeding year. This caused a need for some modifications to the course to handle the increasing number of athletes.

Runners get a grand tour of Pittsburgh as they traverse the course through such neighborhoods as the North Side, West End, South Side, Oakland, Shadyside, Homewood, East Liberty, Highland Park, Friendship, Bloomfield, and Downtown. Residents and spectators come out in droves to cheer on and inspire the runners.
To get spectators to be involved, marathon officials have instituted “Cheerathoners” who man Inspirations Stations along the course. Schools, clubs, and athletic teams can enter a contest to be the best cheerleaders on the course. After the marathon’s conclusion the runners can vote online. The most inspirational cheerathoners on the course are then awarded grants.
The neighborhood along the course supports the runners with cheers of encouragement and festivals. Each small communities’ traditions and ethnic backgrounds are prominent in their celebrations. Various dance, music and food line the streets for the competitors to pick from as they pass. As they weave through Pittsburgh they are greeted with a buffet of culture. The Dick’s Sporting Goods Pittsburgh Marathon also raises funds for charitable organizations. In 2010, sponsors and participants raised over $750,000. Nearly 40 different charitable organizations benefited from the funds raised by the marathon. Events leading up to the marathon include the GNC Live Well Pittsburgh Health and Wellness Expo held the Friday and Saturday prior to the marathon at the David L. Lawrence Convention Center.

That year, 50,000 spectators participated in the expo which featured products and services to help the athletes achieve their goals and to help the attendees live a healthy, fit life.

This marathon is not only a great way for Pittsburgh to help others but also to show what wonders it has to offer visitors.

To learn more about the Pittsburgh Marathon or the Health and Wellness Expo visit the official site of the marathon.