If you grew up in Pittsburgh during the 1960s and early 70s, you probably watched Paul Shannon’s Adventure Time and remember him introducing cartoons by taking his “magic sword” and saying the phrase, “Down goes the curtain and back up again for Beanie and Cecil” or some other cartoon. However, there is another famous curtain in Pittsburgh, and when it went down, it stayed down and proved impenetrable. And that curtain was The Steel Curtain.

The Steel Curtain was the name coined to refer to the Steelers defensive line of the 1970s, one of the most storied defenses in all of NFL history and the one that helped to turn the sad sack Steelers into a championship dynasty. With the Steel Curtain defense, the team won four Super Bowls (IX, X, XIII, and XIV) in the 1970s in six years.

Mean Joe was selected in the 1969 NFL draft out of North Texas State University by the Steelers as the No.1 pick. The left tackle was also named the NFL’s Defensive Rookie of the Year. In 1972 and 1974, he was selected as the NFL’s Defensive Player of the Year. He was elected to the Pro Bowl 10 times. Mean Joe was not only tough, he was durable and played 91 games straight without an injury. He was enshrined in the Pro Football Hall of Fame in 1987 and is fondly remembered for his famed Coca-Cola commercial.

Hollywood Bags was also drafted in 1969 by the Steelers out of the University of Arkansas Pine-Bluff but in the 10th round. In 1971, he became a starter and played for 10 years. He was selected to the Pro Bowl six times and was named to the NFL 1970s All-Decade Team. He acquired his nickname for wearing golden shoes. He was on the ballot for the Hall of Fame in 2005 and 2006 and sadly, was not elected. Greenwood died in 2013 at 67 from kidney failure.

Mad Dog was drafted as a fourth-round pick from East Texas State University by the Steelers in 1971. He was elected to two Pro Bowls and is most remembered for leaving a hospital bed and playing Super Bowl IX with pneumonia. He earned the name Mad Dog because of how intensely he played the game. White died in 2008 at 58 from complications from back surgery.

Fats was drafted in the eighth round of the 1971 NFL Draft by the Steelers out of Texas Southern University and is perhaps the most overlooked of the members of the Steel Curtain. He only made the Pro Bowl twice but was known for his punishing style of play. He also died in 2008 at the age of 59 in car crash. He grew into his nickname as reports before his death stated that he weighed well over 400 pounds.

Although only Joe Green made it into his 70s and gained entrance into the Hall of Fame, the Steel Curtain remains immortalized in the memories of Steelers’ fans. So much so that in 2019 Kennywood Park will open a new Steel Curtain roller coaster, making the Steelers and the famed Steel Curtain defense the only one to have a roller coaster named for them. 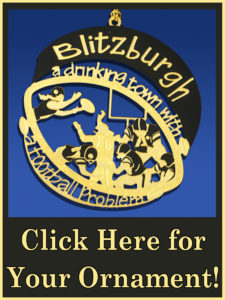