If you’ve lived in Pittsburgh for any length of time, you’ve probably met someone of Ukrainian descent. Or maybe you are Ukrainian yourself. For those who are not Ukrainian, you may not know much about this nationality group and the country from which they hail. This is not surprising since for centuries, Ukrainians have been valiantly trying to hold on to their country, independence, and culture. That struggle continues today.

Ukraine is the largest country situated entirely in Europe and is bordered by a number of countries, the most prominent being Russia. It is roughly as large as Texas and has nearly twice the population at 44 million citizens. Ukraine is believed to have been inhabited for the last 44,000 years, most likely because it is an agricultural gem with fertile farmlands. For that, it is known as Europe’s breadbasket. Because of that, Ukraine, which some believe to mean “borderland,” has always been a land coveted by others and has been invaded numerous times.

Recently, the Soviet Union controlled Ukraine until 1991, when Ukraine declared its independence. You may have heard Ukraine referred to as “The Ukraine” in the past, but that moniker has been shed because they felt that it showed subjugation to foreign powers that have dominated it. Other scholars believe the word “Ukraine” means homeland, which seems more logical for inhabitants to refer to their native country as the homeland rather than the borderland.

Ukraine has seen more than its share of turmoil. When there is political strife or war, people suffer and many flee. Under the iron fist of Joseph Stalin, it is estimated that 7 million Ukrainians starved to death between 1932 and 1933, in what became known as the Ukrainian Genocide Famine or Holodomor. In addition, another 5,000 scholars, scientists, cultural leaders, and clergy were executed or exiled to prison camps during that time.

The Pittsburgh area is home to the fourth largest Ukrainian population in the United States, with most settling in the South Side, Carnegie, and McKees Rocks. At one time, there were 21 Ukrainian Catholic Churches and 16 Orthodox Churches in the area. The first to be established was St. John the Baptist Catholic Church on the South Side. As you drive along the Parkway East, you can see its golden domes gleaming in the sun.

The Pittsburgh area has seen four waves of immigration from Ukraine. The first wave came from 1880-1914. Those immigrants arrived here seeking jobs in the local mines and steel mills. Others arrived in the 1920s, 1950s, and from 1991 to present day. More than 40,000 people in the Pittsburgh area claim Ukrainian heritage.

Because Ukraine is such a large country, it has often been a convergence of east and west, with those in the east being more heavily influenced by the Russian culture and Orthodox Church, while those in the west most associated with European culture and the Roman Catholic Church. Many conquering countries and regimes have tried to extinguish Ukrainian culture, and at present, sadly, that seems to be the case again. Here in the Pittsburgh area, those of Ukrainian descent have gone to great lengths to preserve their unique heritage.

In 1950, a Ukrainian radio program began as a service to immigrants in the area. The program still airs Sundays on WPIT. In 1963, the Poltava Ukrainian Dance Company was founded to preserve the musical and dance culture. The troupe has performed throughout the country and annually at the Pittsburgh Folk Festival. A school of Ukrainian Studies was also instituted to foster and maintain Ukrainian culture and identity through the teaching of Ukrainian history, language, and the arts, while the Ukrainian Room at the Cathedral of Learning was dedicated in 1990 and features carved beams and traditional icons.

For those who are not Ukrainian, the first introduction to the culture may have come through food, whether decorated or deliciously cooked. Ukrainians are noted for their intricately designed Easter Eggs known as pysanky. Using wax and dyes, traditional folk designs are written on the eggs, with a stylus filled with wax. The eggs are then dipped in dyes, in a wax resist or batik method. The eggs make for a dazzling display.

The Ukrainian Community of Western Pennsylvania, a nonprofit, was formed in 2009 to keep the Ukrainian spirit alive. Furthering that goal, St. Mary’s Ukrainian Orthodox church in McKees Rocks has hosted Pittsburgh’s largest Ukrainian festival for more than a decade every July. Ukrainian foods and baked goods are served, favorites such as pierogies, kielbasa, and halushki, as well as Ukrainian beer. Collectibles and entertainment are also offered.

The inscription carved in the center beam at the Cathedral of Learning’s Ukrainian Room is a quote from Ukrainian bard Taras Shevchenko. It aptly sums up the delicate balance Ukrainian immigrants face when assimilating as Americans while remembering their Ukrainian heritage: “Learn, my brothers! Think and read …Learn foreign thoughts, but do not shun your own country.” 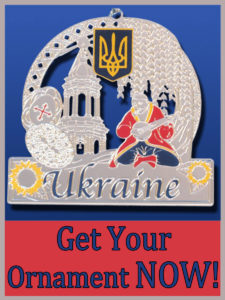