I didn’t grow up under a roller coaster, like Woody Allen’s character Alvy Singer in the movie Annie Hall, but I did grow up very close to one. I grew up in West View, the home of West View Amusement Park. I was a kid in the 1960’s and 1970’s, right before the park went into decline and closed. But even in its waning days, it was still the heart of the community. West View Park had a certain mystique, though not as prestigious as Disneyland.

Most people who lived outside the area assumed that we went to West View Park all the time, but that was not so. My family usually went there once on school picnic day, and then possibly again during Thorofare Days, when you got discounted tickets from the now-extinct supermarket chain.

I suppose we didn’t go there more often because in those days, most families didn’t have the disposable income that they do today for repeat visits to the park. But the infrequent visits made going there even more special. I have so many memories of the park that it’s hard to narrow them down. I went to St. Athanasius grade school, and our school picnic was always in early June. One year, my little sister and I got new “tent dresses.” They were loose-fitting, colorfully printed dresses popular in the mod 60’s. I can’t imagine wearing a dress to an amusement park today. On school picnic day, the excitement was almost too much to bear. Our rubber-toed Keds couldn’t get us across the entrance’s wooden bridge that connected the outside world to Kiddieland fast enough.

Once inside the park, it was like entering another universe where all cares disappeared. Well, maybe not all. Once, as I was getting off the carousel ride in Kiddieland, my foot got caught on a rein, and I fell onto the greasy platform. For the rest of the day, I looked as if I were a grease monkey.

There was nothing better than meeting your classmates at the park and riding with them. In those days, I think they were stricter about admitting you onto the roller coasters than they are today. Perhaps that was because they only had a bar or leather strap to keep you in your seat. My girlfriends and I would lock arms and hold onto the handle as we nearly flew out of our seats on the Dips and Racing Whippet. The Bat Chute, Boot Hill, Davey Jones’ Locker, Alpine Sky Ride, and the Double Ferris Wheel were some of the other rides unique to the park. Also unique to it was the multi-outlet water fountain whose water had the odor of rotten eggs. West View Park was where I first heard the The Doors’ version of Light My Fire as it was blasted from the loudspeakers in the park.

While it was special inside the park, life outside it was special as well. My grandmother lived on Westfield Avenue, a street traversing one of the nearby hills. From one of her windows, you could see the Dips as they made the hairpin turn near Route 19. We used to sit at the window with small opera glasses to watch the people screaming on the Dips as they flew by. On warm summer nights, from my house on the other end of West View, you could still hear the toot of the train when you were tucked into bed.

It was sad to see the park’s popularity decline, and it eventually be demolished and replaced with a shopping center. But like a loved one who has grown old and passed on, you don’t remember in their decline, but in their heyday.

Sometimes when I’m stopped on Route 19, I look over to where the park used to be, and I try to remember what it was like to be there. Crumbling buildings don’t spring to mind. Instead, I see happy people streaming into the park. I smell the “egg water” and popcorn. I hear the toot of the train and the clack, clack, clack of the Dips as the car climbs the first hill, and the moment of suspenseful silence before it plunges. I hear the screams of the riders and feel my stomach rise. And in the rush of excitement, I’m reminded that West View Park is not gone. It resides in the hearts of all who ever followed the red metal arrow “West View Park” signs to my hometown, and who delighted in seeing their school picnic’s name emblazoned on the park’s big marquee. 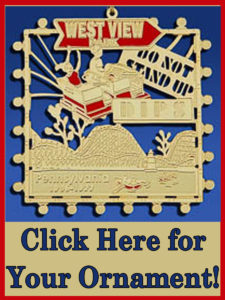