What’s in a Name? – Butler County 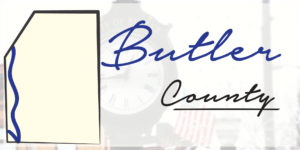 Brush Creek is the main water source in this municipality, and back in the day, cranberries grew along it, attracting deer and in turn hunters. Although the cranberry bogs have long since disappeared due to drought, the township remembered them when it came time to incorporated in 1804.

Talk about a contrast. At one time, Harmony was known as Murdering Town. In 1753, George Washington and Christopher Gist came through this area and came under gunfire. Later in 1804, George Rapp and his communal religious group The Harmony Society came her and settled, calling their attempt at a utopian community Harmony. Thank goodness. Could you imagine trying to promote tourism and commerce in Murdering Town?

Although a subject for “out-of-this-world puns,” (sorry, couldn’t resist), no one is exactly sure how this area of Butler got its name. Some speculate it came from a shortened version of the name “Marshall,” which was the surname of a prominent resident of the time, Samuel Marshall. At least, it’s not named Area 51.

This town has always had German roots. Originally called Germania, it was founded as a German farming community by F. Carl Roebling, who is noted for building the Brooklyn Bridge, and his brother, John. It was later named Sachensburg after that region in Germany, and then it was anglicized to Saxonburg.

In 1779, Col. Daniel Brodhead led an expedition from Fort Pitt to suppress the Seneca Indians north of the fort. The Indians surprised the troops and began to purse them. The soldiers fled across a stream studded with large, smooth rocks. Wearing heavy boots, the soldiers were able to cross on the rocks, but the Indians slipped and fell into the stream. The Indians called the stream “Wechachapohka,” which meant “slippery rock, “which later led to the town’s naming.

Once known as Sunnyside, this town in Butler county was renamed by the railroads as Valencia.

Zelienople has a noble background. In 1802 Baron Detmar Basse came to the area from Frankfurt, Germany, and called the village he established there Zelienople after his daughter, Zelie, whose actual name was Fredericka. Good thing she adopted a nickname. Although Zelienople is a bit unusual, Frederickanople just doesn’t roll off the tongue.