The Road to Canton: Steelers in the Hall of Fame

To borrow a saying from the late great Pirates broadcaster Bob Prince, the Pittsburgh Steelers franchise is a classic example of Prince’s sports maxim the “hidden vigorish.” According to Prince, the hidden vigorish, states that the more you lose the closer you come to winning. The Steelers franchise was founded in 1933, and during the years from their founding until 1972, the team did a lot of losing. The Steelers won their division only once during those nearly four decades of play–in 1947, and they lost that division championship match.

As a result of those lean years, only a few Steelers trickled into the NFL Hall of Fame during the first few decades of the hall’s opening. The hall of fame opened in 1963 in Canton, Ohio, and the first inductees were sort of “catch up” inductees, obvious legends of the game who were a shoe-in for inclusion such as league founders, franchise owners, and outstanding players of by-gone eras. In that inaugural year, the Steelers had two inductees: Bert Bell (a co-owner of the team) and Johnny “Blood” McNally, who played and coached in the 1930s. The following year, Art Rooney, Founder and President of the Team, was inducted in 1964.

Throughout the rest of the 1960s, the Steelers sent a quartet of players to the hall: Bill Dudley, a player in the 1940s, and Walt Kiesling, a player in the 1930s and coach in the 1940s and for one season in 1961, were taken into the hall in 1966. Bobby Layne, a player from 1958-1962, was inducted in 1967, while Ernie Stautner, who played 13 years from 1950-1963, was inducted in 1969. Players are inducted into the hall on an individual basis and not by team. There were several other inductees who made stops during their careers in Pittsburgh on their way to the hall including players and coaches such as Cal Hubbard, Marion Motley, Earle Neale, Bill Hewitt and Len Dawson. Of all the players inducted during the 1960s, only Stautner was a lifelong Steeler.

The Trickle of Steelers Turns into a Torrent

True to the law of the hidden vigorish, the hapless Steelers had lost so much, they had to start winning. And winning they did. During the 1970s, the team won four Super Bowls, twice back to back in 1974 and 1975 and then again in 1978 and 1979, establishing the Steelers of 1970s as one of the greatest dynasties in NFL history. This unprecedented success set the stage for so many trips to Canton in the late ‘80s, ‘90s, and 2000s, that it’s a wonder that there aren’t ruts worn into the Ohio Turnpike from all the Steelers and their fans heading to the hall for induction ceremonies.

The Steelers dynasty years featured some of the greatest athletes to every play the game, resulting in a torrent of players heading to the hall. In 1987, Mean Joe Green was taken in as was Steelers great John Henry Johnson, whose best years as a player were spent as a Steeler during the 1960s. In 1988, Jack Ham was inducted, and for the next two years, Steelers like passengers on Noah’s Ark went into the hall in pairs. Nineteen eighty-nine saw Mel Blount and Terry Bradshaw inducted, and in 1990, Steelers favorites Franco Harris and Jack Lambert joined the swelling ranks of teammates in Canton.

The man behind the success, Coach Chuck Noll, was inducted in 1993 as was Mike Webster in 1997. President and Chairman Dan Rooney was admitted in 2000 and the dynamic duo of Steelers wide receivers Lynn Swann and John Stallworth followed Rooney with Swann entering the hall in 2001 and Stallworth in 2002.

From 1990 through 2015, the Steelers made it to the post-season 16 times, along the way claiming two more Super Bowl rings in 2005 and 2008. While the decades of the ‘80s and ‘90s produced no Super Bowl teams, they did produce some hall-of-fame players: Rod Woodson, who was inducted in 2009 and Dermontti Dawson who was inducted in 2012 along with Jack Butler, the Steelers great who played in the 1950s.

Who’s Up Next for the Hall?

The Super Bowl teams from the “one for the thumb” and “Sixburgh” eras are only starting to be considered for inclusion in the hall of fame. Jerome Bettis is the first from that era of Steelers stardom to be taken into the hall. “The Bus” was inducted in 2015, and in 2016 linebacker Kevin Greene followed The Bus in.

The COVID-19 pandemic forced the cancellation of induction festivities in 2020 when three Steelers—Coach Bill Cowher, Safeties Troy Polamalu and Donnie Shell were elected, but that only made the 2021 festivities that much more special for Steelers fan. When both the 2020 and 2021 inductees where honored, of the 12 being taken into the hall, five of them were Steelers. Guard Alan Faneca and late Scout and Assistant Director of Player Personnel, Bill Nunn were members inducted in 2021.

As players retire, the speculation as to whom will be honored by the hall in the future will certainly increase and provide fodder for barroom debates, but among the names cited are Ben Roethlisberger and Hines Ward not to mention the highly deserving and overlooked member from the Steelers of the 1970s L. C. Greenwood.

The Chicago Bears stand atop the heap of the hall of fame inductees with 30 players, coaches, or front office members to have one time been a Bear. The Steelers can boast 29 members who were once affiliated with the team, not a bad statistic considering the Bears have been around 13 years longer than the Steelers and for forty years, the Steelers were perpetual losers. The Steelers did a lot of making up for lost time since the 1970s.

Perhaps it’s because fans endured so many losing years that they take extra pleasure in winning and supporting the team. Whenever a Steeler is inducted into the Hall of Fame, it can be assured that hordes of Steelers’ fans will flock to Canton to cheer, remember, and express their gratitude to the players, coaches, and management who have helped to make Pittsburgh proud.

Perhaps it’s because the Steelers fans endured so many losing years that they take extra pleasure in winning and supporting the team. Whenever a Steeler is inducted into the Hall of Fame, it can be assured that hordes of Steelers fans will flock to Canton to cheer, remember, and express their gratitude to the players, coaches, and management who have helped to make Pittsburgh proud. 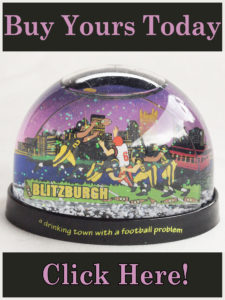