There’s no Tuesday like a Taco Tuesday. So, when we had the opportunity to turn our business meeting into lunch, 202 Hometown Tacos was at the top of our list. Located in Bellevue, 202 Hometown Tacos is a Tex Mex/American style taco shop and bar dedicated to being “that fun & tasty place that continues to be a driving staple” for the community.

This was the first visit for all of us; the restaurant had been recommended by a friend several months ago, and we finally had a reason to check it out. During the height of pandemic restrictions 202 served takeout tacos and margaritas through their garage door-style bar windows. With the way things are now, we called ahead to make sure they were offering dine-in services before the three of us headed out.

We had no issues finding the restaurant; they are the only taco spot in Bellevue and the black façade stands out from the rest of the block. Upon entering, the first thing we noticed was the long and welcoming bar. Angela quickly popped out from the kitchen and offered to open a table for us in the larger dining area off to left, but we opted for a table in the bar area. It was clear that she was running the front alone. The service industry is hard enough right now and we didn’t want to give Angela any extra running around. From the get-go she was pleasant and personable; she really made me feel like I was meeting up with an old friend. 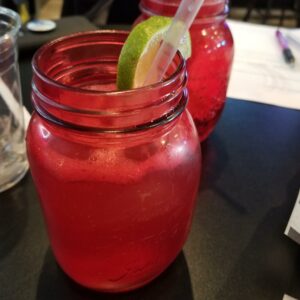 I quickly zeroed in on the Tuesday special: three tacos and a margarita for $13. Luckily for my coworker and I, we have a boss who doesn’t mind if we enjoy a nice cocktail at lunch. The selection of margarita flavors was generous, but we both ended up wanting to try the black cherry to start. It had a deep, tangy flavor with a lime aftertaste. Though clearly artificial flavoring, it was still good. Because we both really like margaritas, seconds were ordered about halfway through our lunch meeting. We got mango and raspberry. One taste of each and we decided to swap. My coworker declared the raspberry to be her favorite of the three. I enjoyed the mango, but I think the black cherry won first place in my book.

202 doesn’t have a particularly large menu, but there is something for everyone. Tom kept things light with the Mama and the Salmon, which was on special. The Mama taco is simple—what you would think of as the “standard” taco: ground beef, lettuce, tomatoes, and cheese. The Salmon taco had a lovely honey garlic sauce on top, which Tom described as light and refreshing. 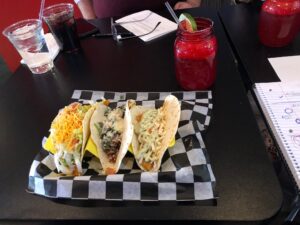 Going just slightly more adventurous, I ordered two Carne Asada tacos and one Pollo. The Carne Asada was good—my favorite of the two. But I was disappointed by how little Mexican street corn there was. I would have loved more corn and for the jalapenos to be cut up smaller. The Pollo had a smooth and light flavor with an avocado sauce that was pleasant. My coworker chose the Pollo as well, along with the Papa and the other special, the Chorizo. The Papa is similar to the Mama, but with the simple addition of a chipotle like BBQ sauce, which she found favorable. According to her, if spicy is what you want, then go with the Chorizo. It was bursting with flavor and spice. Just make sure to keep your drink nearby. 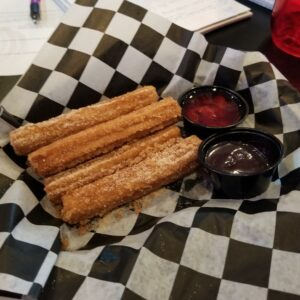 After the tacos, I couldn’t resist ordering the churros. I have too much of a sweet tooth to pass them up when the boss is paying. Soon Angela was placing a dish with six churros with chocolate and strawberry dipping sauces in the center of the table. I dug in right away. My coworker tried one and immediately proceeded to spill cinnamon sugar all over the table. She said one was all the sweets she needed, leaving the me to eat the other five. It was the perfect end to my meal.

Our lunch lasted almost 3 hours. Angela remained attentive while giving us the space needed to have our meeting. We had the chance to talk more with Angela towards the end of our visit. She has worked there for almost two years and often enough is in charge with just a cook as back-of-house help during the day. The boss was due in later in the day as it was expected to be busy due to their weekly Tuesday karaoke. This summer they plan to open an outdoor area which will have a beach-like theme complete with sand and yard games. We were really happy with our experience and meal. Looking forward to returning for tacos and another chat with our new friend Angela.