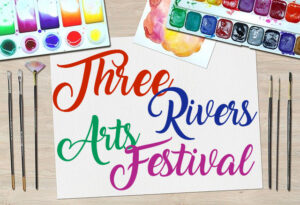 The first Three Rivers Arts Festival was a four-day event at the Point. Many records indicate that this occurred in 1960. There seems to be some debate as the 25th Silver Anniversary was held in 1984.  Nevertheless, this festival has become a yearly tradition that Pittsburghers look forward to.

The festival was founded by the Women’s Committee of the Carnegie Institute to bring art outside the museum walls to the public. The debut event featured 223 artists and a concert from the American Wind Symphony on a river barge. Nearly 20,000 people came to the event. Sadly, on the last day strong storms swept through the city. It blew 10 paintings in the river and damaged many more.

The festival was so well-received that by 1964, it had grown to a 10-day event. By now it included children’s art and drew 150,000 attendees. During the 1965 Three Rivers Festival, it rained nine out of the 10 days. In 1967 a mural which could be painted on by attendees was created.

Over the years, literary arts, dance, film, and other forms of artistic expression were added. In 1971, the first Artists Market was introduced. It allowed visitors to the Three Rivers Arts Festival to take a piece of art home with them. The “Children’s Activity Center”, introduced in 1974, was the first of many family-friendly activities added to the festival. In true 70s style, the 1979 festival ended with a Disco party on the Boulevard of the Allies, where 3,000 people “boogied down in the ‘burgh.”

In 1982 the Kool Jazz Festival and the Three Rivers Arts Festival were celebrated together. Ella Fitzgerald performed before a crowd of 100,000 while Richard Haas’ murals are admired. In 1984, the festival celebrated its Silver Anniversary with music from Roberta Flack and composer Philip Glass.

June is always a rainy month in Pittsburgh. Some in the area have often remarked that, when the arts festival booths go up, the rain comes down. In 1987, those rains washed out a performance by the iconic Ray Charles.

The decade of the 90s for the Three Rivers Arts Festival began with a controversy over a sculpture called “Hunky Steel Worker” by Luis Jimenez. In 1990, the 12-foot fiberglass statue of a steelworker was met with disapproval by several ethnic groups in the area. The term “hunky” can be seen an ethnic slur against Eastern Europeans.

In 1994 a sound installation recounting the lives of African American women adds diversity to the event. George Benson, a local man, entertained 40,000 with a concert in 1996. That year six neighborhoods participated in “Points of Entry”, which would go on to become a book.

The 2007 and 2008 Three Rivers Arts Festival moved out of Point State Park due to renovations. It moved back in 2009. In 2019, the festival celebrated its 60th Anniversary, and it seemed nothing could stop the festival, but alas in 2020, like most everything that year, it was cancelled due to the COVID-19 pandemic. Happily, the festival returned for its 62nd year in 2021 with a hybrid event of in-person and virtual attractions.

But like the rains in Pittsburgh in June, the Three Rivers Arts Festival seems to be unstoppable and will continue to bring Pittsburghers together in appreciation of art.